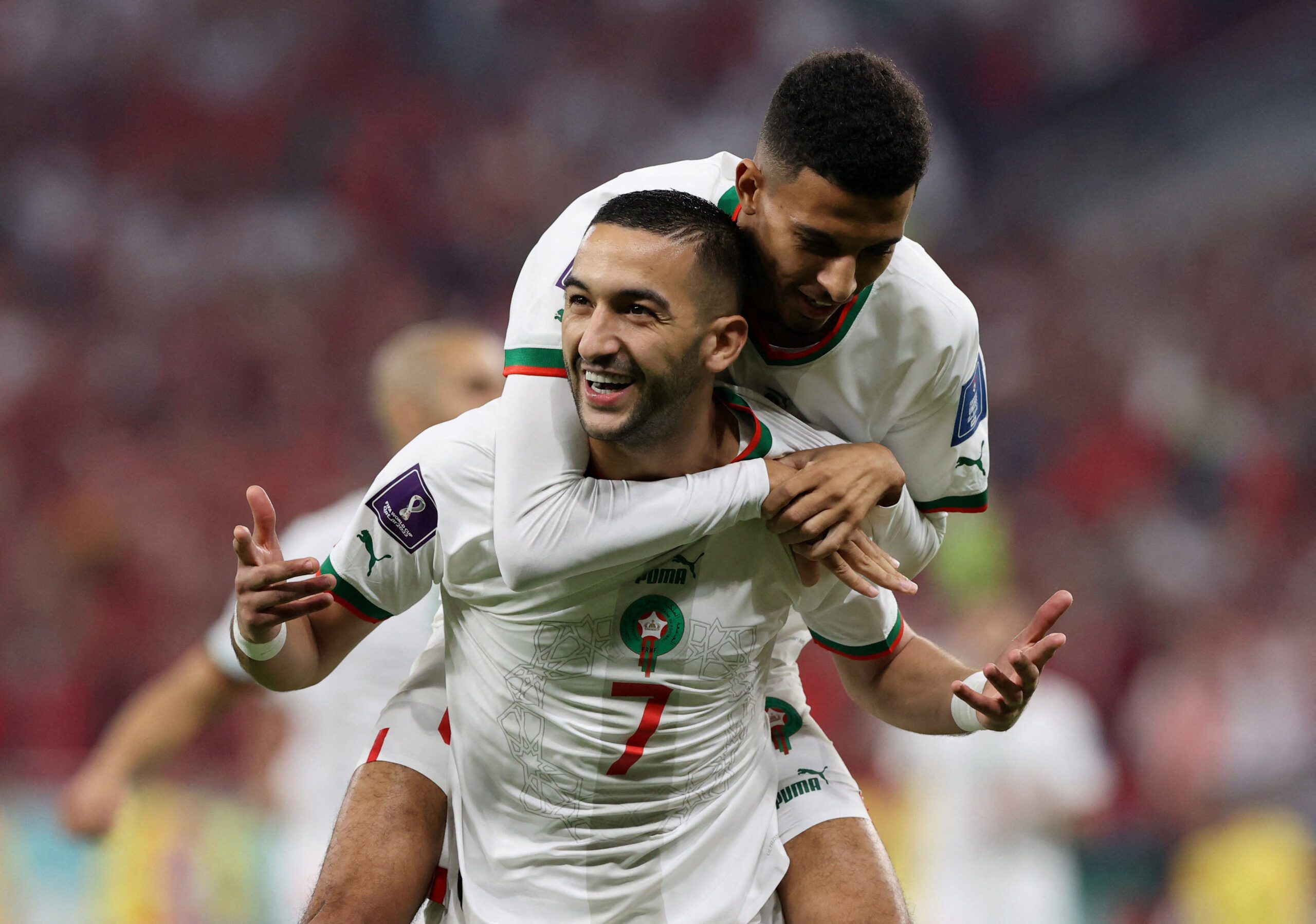 DOHA, Qatar – Moroccan fans celebrated on Thursday, December 1 (Friday, December 2, Manila time) as their country became the only Arab nation to reach the knockout rounds of the first World Cup held in an Arab country, dancing and cheering in the stadium in Qatar and on the streets back home.

An impassioned Moroccan team clinched a spot in the last 16 of the World Cup for the first time since 1986 by defeating the already-eliminated Canadians, 2-1, mercilessly capitalizing on their opponents’ blunders.

Morocco, who needed a win or a draw in their final Group F match to reach the knockout rounds, took advantage of a weak clearance by goalkeeper Milan Borjan that landed on the foot of Hakim Ziyech.

Cheered on by a boisterous crowd of Moroccan fans, midfielder Ziyech effortlessly lobbed the ball over the stranded goalkeeper to open scoring in the fourth minute.

Borjan had been placed in an unenviable position by central defender Steven Vitoria, whose weak back pass forced the goalkeeper to race Moroccan forward Youssef En-Nesyri to the ball.

En-Nesyri remained dangerous throughout the first half, doubling Morocco’s lead in the 23rd minute when he ran onto a long ball from Achraf Hakimi and beat Borjan at the near post.

En-Nesyri also thumped a volley into the Canadian net during stoppage time in the first half but that goal was ruled offside.

Overwhelmed with emotion, Hakimi wept after the match.

“I didn’t think about it, but now I realize we made history,” he said. “We work very hard and we deserve it.”

With Croatia drawing with Belgium 0-0 in the other Group F game, Morocco finished first in the group and will face Spain, the second-place finishers in Group E.

Moroccan manager Walid Regragui predicted his side will prove capable of challenging a mighty opponent in the stage.

“We are going to be a very difficult team to beat,” he said. “I think African teams can go far. Why shouldn’t we dream of winning the World Cup?”

Moroccan defender Nayef Aguerd put Canada on the scoreboard with an own goal, the first of this World Cup, by accidentally flicking a cross by Sam Adekugbe past his own goalkeeper Yassine Bounou in the 40th minute.

Canada, who are exiting their first World Cup since 1986 without a point, automatically qualify for the 2026 tournament as co-hosts along with the United States and Mexico.

In earlier matches, Morocco tied with Croatia and scored a surprise win over Belgium, the second-ranked team in the world.

“This team can go all the way in this World Cup!” shouted a young woman draped in a Moroccan flag, leaning from the window of a packed car in Rabat as people rushed towards a central district to join street celebrations.

In Qatar, where the home team along with Saudi Arabia and Tunisia have already been knocked out, Morocco now carries the mantle for an Arab world that has cheered victories by Arab teams against some of the tournament favorites.

Hundreds of fans crowded outside the stadium, some pushing and shoving and others trying to climb a fence to get in even after the game had begun, a Reuters journalist there said. Many lacked tickets but hoped to see the game.

“Fans crowded here because they can’t enter the stadium. Almost all these fans have no ticket and they love Morocco and want to get in,” said one, Abdulmajid Mohammed, from Saudi Arabia.

The crowding also left some fans who said they had tickets unable to enter. “We have tickets but they closed all the doors and are not letting people in,” said Mohammad Abdelhadi from Libya, who said his group’s tickets each cost more than $200.

FIFA and Qatar’s World Cup organizers, the Supreme Committee for Delivery and Legacy, did not immediately respond to a Reuters request for comment on the crowding outside the stadium.

The deafening support has been a 12th man for the Moroccan side.

“They proved on the pitch that they are lions… honestly as a Saudi we lost yesterday but we made up for that loss with Morocco’s win,” said Talal Ahmed Obeid, watching at a fan zone in Casablanca.

While Morocco is a proud member of the Arab League, the country has also in recent decades embraced its African identity and Berber lineage, enshrining Amazigh as an official language.

Mohamed Tahiri, a lawyer out celebrating in Rabat among crowds waving flags and honking car horns despite the rainy weather, said Morocco was the only team left for Arabs to identify with.

“This is a day of celebration not only for us Moroccans but for all Arabs and for all the Amazigh North Africans too,” he said.

People had already been out looking for cafes with televisions to watch the game hours before kick-off.

“My generation is experiencing this for the first time,” said Oufae Abidar, 38, a company employee. She was a toddler when Morocco last reached the knockout phase in 1986. Morocco’s last World Cup appearance, four years ago, ended in the group stage.

Back in Doha, Omani national Saeed Al Maskari, 30, said he would be supporting Morocco now. “We are in the Asian part (of the Arab region) and they are in the African part. But we speak one language,” he said. – Rappler.com