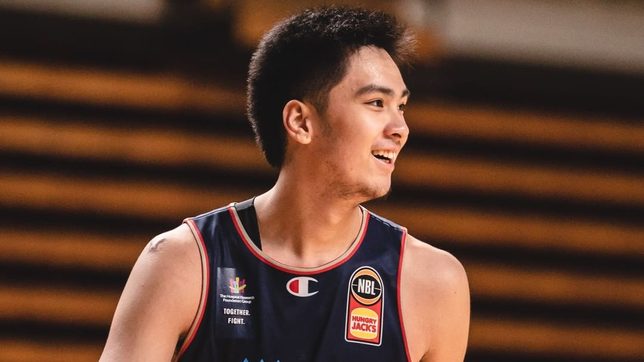 ROOKIE. Kai Sotto has to fight for his spot in the Adelaide 36ers' rotation.

Filipino star prospect Kai Sotto again watched from the sidelines as the Adelaide 36ers eked out an 82-80 escape against the Tasmania JackJumpers on Sunday, November 21.

With the win, the 36ers earned 6 points to secure the top spot in the standings.

Adelaide’s outlook looked bleak early after it went down by as many as 21 points, 12-33, at the end of the first quarter. But the 36ers got their bearings back in the clutch, thanks to 19 points from guard Dusty Hannahs.

Big man Daniel Johnson, meanwhile, returned from a one-game absence, and followed up with 17 markers on 6-of-9 shooting.

Clint Stiendl paced the tough loss for the Tasmania home team with 17 points as well.

Despite another Sotto benching, head coach CJ Bruton still had nothing but praise for his NBA-aspiring project.

“I love what he brings. I love the kid. I think he’s been brought up the right way, taught the game the right way, and it shows by his character within the group,” Bruton said.

“I don’t think he won’t be playing very much between now and the start of the season. When you’re 19 years old and you’re a kid, there’s a lot of things that you need to do to look after yourself, and we’re just making sure that we have the best Kai available for Game 1 and moving forward.”

Sotto might get a shot at cracking the rotation again as the 36ers face the Perth Wildcats anew on Friday, November 26. – Rappler.com