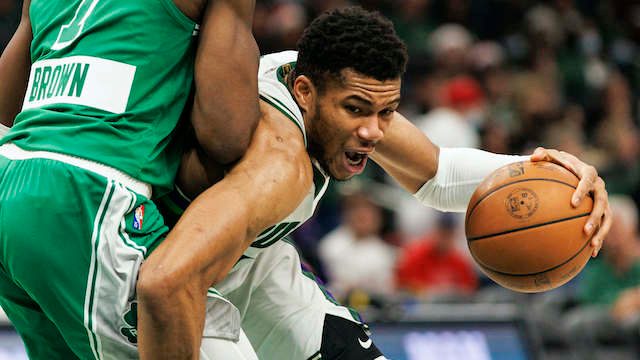 Giannis Antetokounmpo had 36 points and 12 rebounds in his return from COVID-19 protocols as the Milwaukee Bucks rallied from 19 points down to beat the visiting Boston Celtics 117-113 in a Christmas Day showdown on Saturday.

Antetokounmpo finished 13-of-23 from the field and added five assists in just under 30 minutes after missing five games in the NBA’s health and safety protocols.

Jayson Tatum and Jaylen Brown scored 25 apiece to lead Boston, which lost for the seventh time in 11 ties.

Marcus Smart added 19 points and Payton Pritchard scored 16 off the bench for the Celtics.

Shortly before tip-off, Boston guard Dennis Schroder became the team’s 13th player in over a week to enter the league’s health and safety protocols.

Boston was up 62-47 at halftime after leading by as many as 19 in the second quarter.

Milwaukee surged back with a 43-point third quarter and pulled within 94-90 entering the fourth. The Celtics scored the first eight points of the final period in a 10-2 run to reclaim a double-digit advantage.

Brown missed a potential go-ahead 14-foot jumper with 22.1 seconds to play and Middleton made it a three-point game with a pair of free throws with 17.8 on the clock.

Antetokounmpo blocked a dunk attempt by Robert Williams III with 7.3 seconds to go and a coach’s challenge gave Milwaukee the ball back after it went out of bounds off a Celtics player. Middleton made 1-of-2 free throws at the other end to seal it. – Rappler.com