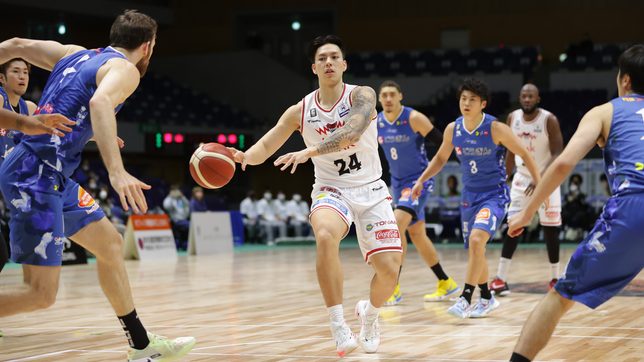 EXIT. It's the end of the road for Dwight Ramos and the Toyama Grouses in the knockout-style tournament.

MANILA, Philippines – Dwight Ramos failed to find his groove after a two-week B. League break as the Toyama Grouses bowed out of the 97th Japan Emperor’s Cup after a fourth-round loss to the Kawasaki Brave Thunders, 70-58, on Wednesday, December 1.

The Gilas Pilipinas stalwart was off the mark all night long and finished with just 8 points on a frigid 2-of-14 clip, including a stretch where he missed his first nine two-pointers. He also grabbed 5 rebounds.

Ramos’ shooting woes were also compounded by the fact that the Grouses as a whole went ice-cold as well, and turned a 22-19 first-quarter lead to a 28-40 halftime deficit thanks to a 21-6 second frame Kawasaki barrage.

Toyama, however, clawed back to striking distance in the second half, and came within six, 49-55, off a Ramos and-one bucket with 8:51 left in the final frame.

But that was as close as the Grouses would get as the Thunders stayed composed and responded with a game-sealing 12-4 run, capped by a Pablo Aguilar triple at the 3:12 mark for the 67-53 lead.

B. League veteran and two-time champion Nick Fazekas led the win with a 16-point, 15-rebound double-double plus 3 assists, while former NBA player Brice Johnson paced the loss with massive game-highs of 25 markers on 12-of-19 shooting and 23 boards.

On the other hand, Matt Aquino and the Shinshu Brave Warriors lived on to fight through the Emperor’s Cup quarterfinals as they outgunned the Seahorses Mikawa, 78-69.

Shinshu import Josh Hawkinson did the heavy lifting on both ends of the floor and finished with 32 points, 9 rebounds, and 3 blocks, all game-highs, on an efficient 12-of-17 clip while Aquino tallied zero stats in less than two minutes of game time.

The Warriors will first return to regular B. League action before quarterfinal action kicks off on January 5, 2022. – Rappler.com