MANILA, Philippines -- With a little more than a month to go before the start of the 2013 FIBA Asia Men’s Championships here in Manila, I believe it’s ripe for us to take a look at how most of the competing teams have been prepping for such a monumental contest. I will be detailing what each team has done so far and will be predicting who will probably make the final roster (12 names) for each team.

In Part 1, we will look at the contenders from West and Central Asia – Iran, Lebanon, Jordan, Qatar, and Kazakhstan.

The Cedars are not exactly in training mode just yet. Things are really crazy in Beirut right now, so much so that they postponed their pro league playoffs, they just found a willing benefactor to fund the national team, and they are grappling with the possibility of several key players not making the Manila tournament. I mean, they haven’t even started formal practices yet. Coach Ghassan Sarkis has had his share of detractors, too, with one rumor circulating about how Lebanese-Australian big man Julian Khazzouh won’t even consider playing for Lebanon if Sarkis continues to be the coach. Another thing to consider is the status of the seemingly immortal Fadi El-Khatib. Early reports suggest he might not make the Manila joust because of some family/personal issues, but my insider recently tweeted to me that the Lebanese Tiger will, in fact, join the team around the time of the Jones Cup. My projected final roster (I will be counting Khazzouh and El-Khatib in this one) is:

It is worth noting that a couple of marquee young guys won’t be able to make it to Manila due to injuries. These are 6’8 24-year old Bassel Bawji, who had a banner year for Moutahed in the FLB, and 6’6 21-year old Ahmad Ibrahim, who is seen as the heir apparent to El-Khatib. In the event that Khazzouh doesn’t make it, then perhaps 6’7 PF Bachi Ammouri (Moutahed) can take his place. I believe this might be El-Khatib’s last FIBA Asia campaign, and I am sure he wants to end on a bright note. In the now unlikely event El-Khatib won’t make the roster, his Champville teammate, 6’4 Nadim Souaid, should be the clear replacement. 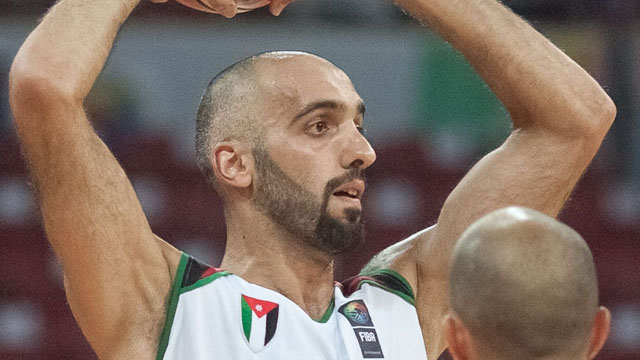 QUESTIONABLE. Abbas is still undecided whether to play for Jordan or not. Photo by EPA/Miguel Gutierrez.

Al Nashama is in high spirits after primary playmaker Sam Daghlas confirmed his participation in the training pool and in the national team. This after Daghlas released a statement earlier in the year that he was retiring from international play, or at least skipping it in 2013. It is a welcome piece of news for Jordan, since the status of star forward Zaid Abbas is still not certain (although my insiders say he is leaning towards joining the team after all) and the exodus of many veterans (Ayman Idais, Zaid Al-Khas, Islam Abbas, and Enver Soobzokov to name a few) have left the 2011 runner-up squad with just a shadow of its former self. Add to that the fact that the Jordanian basketball big wigs no longer tapped the services of long-time reinforcement Rasheim Wright and the talks to acquire super scorer Andre Emmett fell through, and we have a Jordanian quintet that is not exactly in its prime form. The addition of Jimmy Baxter as (hopefully) Jordan’s real and final naturalized player should give a semblance of stability, and their training game result against Algeria (a narrow 58-52 loss) is promising. My projected final roster (I will be counting Abbas and Daghlas in this one) is:

Of those 12 names, only six played in the 2011 FIBA Asia tourney in Wuhan, China. And of those six, Shaher Hussein and Abu Quora weren’t even part of the main rotation. If Jordan’s worst fears surface, meaning Daghlas and Zaid skip the Manila joust, then I’m projecting veterans Khaldon Abu Ruqayah and Mahmoud Abdeen (both from Ittihad Schools) should take their places.

The Qataris are going to break-in a new naturalized player for the 2013 FIBA Asia Men’s Championships and his name is NBA veteran Jarvis Hayes. At 6’8, Hayes is not the typical Qatari import, as most of their past reinforcements – Trey Johnson, Boney Watson, and Chauncey Leslie are examples – have been relatively smaller wingmen. Hayes, however, can play both on the wings or in the block, and he will definitely be a match-up nightmare for anyone in the continent. At 31, however, Hayes doesn’t really address one big concern for the Gulf powerhouse – most of their stars are getting old. Six of their players from the 2012 FIBA Asia Cup team are going to be on the wrong side of 30 when the Manila tournament begins and adding Hayes only increases their average age. What these old legs might lack in athleticism, however, will be made up for with savvy and smarts, which were very helpful when they finished third in Tokyo last year. My projected final roster is:

Now because seven of those guys are 30 or older, it’s quite probable that one or two names from Qatar’s youth program might move up. The one I’m half-expecting to see is recently naturalized 15 year-old 6’10 Meho Haracic from Bosnia. Like Gilas Pilipinas, Qatar is also set to go to Lithuania (on June 24) for conditioning and a couple of tune-up games.

Italian bench tactician Matteo Boniciolli is pulling out all the stops to help put the Kazakhs back in the top tier of Asian hoops. After being absent from the scene for three years, the former Soviet state is ready to show its basketball chops again, and this time they will be parading their first naturalized reinforcement in 31 year-old 6’0 Jerry Johnson. The Kazakhs are currently in Italy and will move afterwards to Slovenia as part of their buildup for the FIBA Asia joust. They will be one of the early birds in Manila so they can get acclimatized to the surroundings and play a couple of tune-ups against Gilas Pilipinas. KAZ is expected to breeze through the first round as only India, Bahrain, and a SEABA team (either Malaysia or Thailand) stand in their way of sweeping Group D. My projected final roster is:

With the addition of Johnson and the return of several stars who were absent the last time Kazakhstan played in the senior’s level of FIBA Asia – Anton Ponomarev, Rustam Yargaliev, and Alex Tyutyunik to name a few – this team is primed to contend not just for a quarterfinals slot. We can be sure that the Kazakhs are coming here to win one of the three tickets to Spain, and they will stop at nothing. Most of the names mentioned above are actually FIBA Asia vets already, but the likes of Kurochka and Marchuk are two of Kazakhstan’s best youth players and I wouldn’t be surprised to see them make the final cut.

In part two, we will take a look at the four powerhouse teams from East Asia – China, South Korea, Japan, and Taiwan.

Enzo Flojo is one of the closest followers of the Philippine National Basketball Team. He is a self-proclaimed Asian Basketball hoop nut, and he doubts if anyone knows as much as he does about the best players in this corner of the world. He maintains a nationally-recognized basketball blog (HoopNut.com), and he hopes you can pester him on Twitter -- @hoopnut.