Angelo Kouame ‘extra motivated’ ahead of FIBA qualifiers in Clark 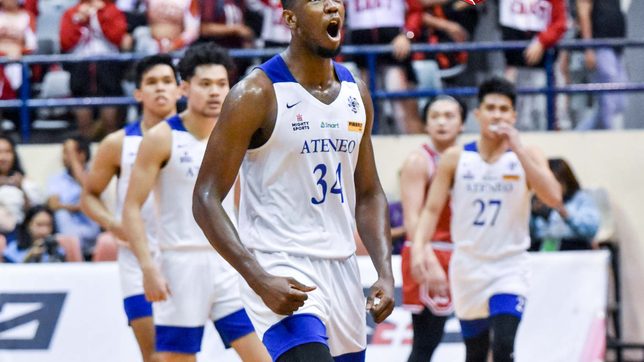 That’s exactly how newly naturalized Filipino Angelo Kouame feels before the national team heads back to its training bubble in Calamba, Laguna on Saturday, May 22, in preparation for next month’s FIBA Asia Cup qualifiers in Clark, Pampanga.

Following months of uncertainty, Kouame can finally breathe a huge sigh of relief after the bill for his naturalization was signed into law earlier this week, which will allow him to suit up for Gilas Pilipinas as early as June.

“You know before, I wasn’t sure if I’m going to play in the qualifiers,” Kouame told Rappler.

“And now, I’m getting myself prepared for it. From now on, I’m trying to get my mind ready for whatever is going to happen in the future,” he continued.

The addition of the 6-foot-10 Kouame is definitely a huge boost for the all-amateur Gilas squad as they are set to take on Korea twice and Indonesia once in the third and final window of the qualifiers from June 16 to 20.

Kouame will also be put to test right away as he is set to go up against more seasoned veterans in former PBA imports Ricardo Ratliffe of Korea and Lester Propser of Indonesia.

Despite this daunting task ahead of him, the 23-year-old Ateneo star, who averaged 12.5 points, 11.8 rebounds, and 2.9 blocks in UAAP Season 82, believes he is ready for the challenge and is excited to play his heart out for the Philippines.

“It’s going to be tough because they (Ratliffe and Prosper) are professional players. So for me, being like a rookie, because you know I’m the youngest import in this competition, it’s going to be a huge experience and I think I’m going to be ready for it,” said Kouame.

“This is the most important thing right now for me, so I’m going to put everything on the table,” he added.  – Rappler.com