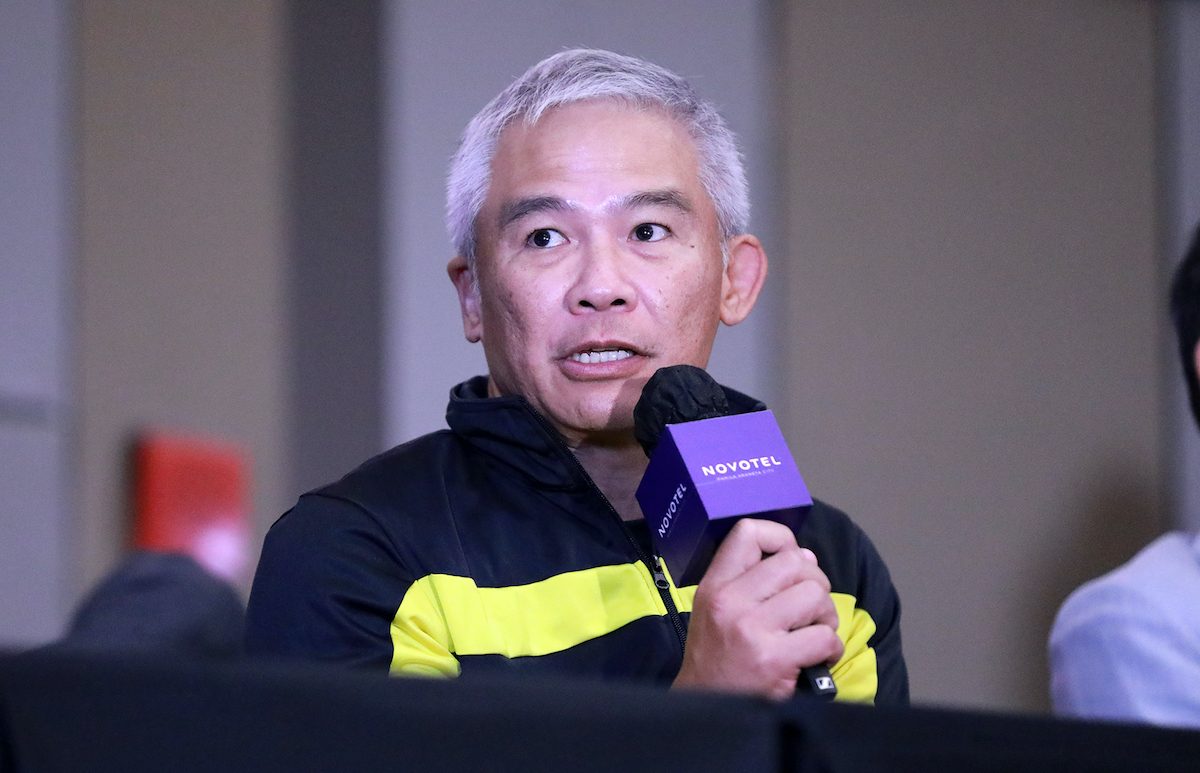 SIT OUT. Chot Reyes sees his finals absence as an opportunity for the rest of the TNT squad to step up.

MANILA, Philippines – It is official: Chot Reyes will miss some games in the PBA Philippine Cup finals.

Reyes will not call the shots for TNT in Games 2 and 3 of its best-of-seven championship series against San Miguel as he committed to Gilas Pilipinas’ fourth window campaign in the FIBA World Cup Asian Qualifiers this August.

Representing the Tropang Giga, Samahang Basketbol ng Pilipinas president Al Panlilio said the organization understands that Reyes has to make the sacrifice for the national team.

“We need to hold the fort for the team for two games while the coach is away,” said Panlilio, who is also the president of PLDT and Smart Communications, during the All-Filipino finals press conference on Friday, August 19.

“From a PBA-PLDT point of view, winning the PBA championship is important to us – very, very important. We’re an organization where we push excellence. But there is a bigger calling at this point, it is flag and country.”

Panlilio likened Reyes’ situation to that of TNT big man Poy Erram, who joined the national team in the FIBA Asia Cup just a day after wrapping up the elimination round of the Philippine Cup.

“We as an org has always been ready to answer to the call,” Panlilio said.

The Philippines’ away game against Lebanon in Beirut on August 25 will be sandwiched by Game 2 (August 24) and Game 3 (August 26) of the PBA finals.

Reyes will be back in the country for Game 4 on August 28 and will once again coach the national team as it hosts Saudi Arabia on August 29 at the Mall of Asia Arena.

Set to miss a PBA match for the first time since his return at the Tropang Giga helm last year, Reyes said it is a challenge for his wards to win the games that he will sit out.

“It is a great measure of my coaching ability if my team can perform at a very high level, even without me, and that really makes me happy,” Reyes said.

“That is what I’m looking forward to – if the team can continue to operate at a very high level even in my absence, that means I’ve done my job, that I’ve coached these guys well.”

It is still unknown, though, who among Reyes’ deputies will fill in for him.

“We look at it not as a problem or a setback but as an opportunity.”

The All-Filipino finals will tip off on Sunday, August 21, a day before Reyes and Gilas Pilipinas fly to Beirut for their Lebanon clash. – Rappler.com