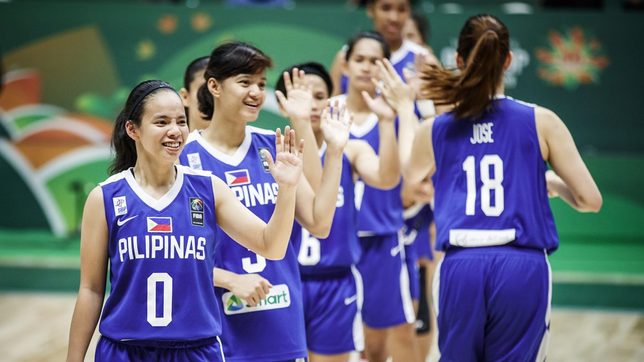 GOAL. The Gilas Pilipinas Women aim for a spot in the World Cup qualifiers.

Gilas Pilipinas Women head coach Pat Aquino assured fans that his players are all set physically and mentally for the 2021 FIBA Women’s Asia Cup set in Amman, Jordan from September 27 to October 3.

Aside from dealing with the loss of Serbia-bound star center Jack Animam, the longtime tactician revealed other logistical challenges his players had to go through just to be in tip-top shape for the biennial continental tournament.

“Each and every day was a challenge, from the swabbing to the team practices, but we need to prioritize our health,” said Aquino.

“Our mental toughness was also tested during our camp, but I feel like that will help us compete against the continent’s best teams.”

Apart from following the rigorous health protocols enforced in their practice bubble in Batangas, the Gilas stalwarts also had to take multiple breaks due to Typhoon Jolina, which brought torrential rains over the province under Signal No. 2.

“We have to take advantage of every opportunity we get to be on the court. Our situation is unique but it will help us in the long run,” Aquino continued.

Gilas Women, ranked 51st in the world, will receive a baptism by fire right off the bat as they face the mighty 2019 Asia Cup silver medalist China on Monday, September 27, 9 pm, Manila time.

In their last two Asia Cup matches, the Filipinas bowed to the seventh-ranked Chinese with an average losing margin of 60.5 points.

The climb then gets even tougher for Gilas on Wednesday, September 29, 12 am, as they face 2019 bronze medalist Australia, ranked third in the world. They historically fared no better in their last two Asia Cup matches, losing an average of 54 points.

The Filipinas, however, may have a better fighting chance in their last group phase game on Thursday, September 30, 12 am, as they face the 34th-ranked Chinese Taipei.

The last-placed team in the group will then take on the bottom squad of the other group in a relegation match.

Only the top four teams at the end of the tournament will earn spots in the 2022 FIBA World Cup qualifiers.

Aquino knows full well the reality of the situation ahead of them in Amman, but is nonetheless grateful for the playing opportunity they have in the middle of the pandemic.

“I have no expectations for this tournament, I am just happy that my players have a chance to compete on the biggest stage once again,” he said.

“At the end of the day, the opportunity to even play basketball is more than we hoped for, so we are just going to go out there, and do our best.” – Rappler.com