FIBA recognizes Gilas’ LeBron Lopez as ‘wunderkind to watch’ in 2022 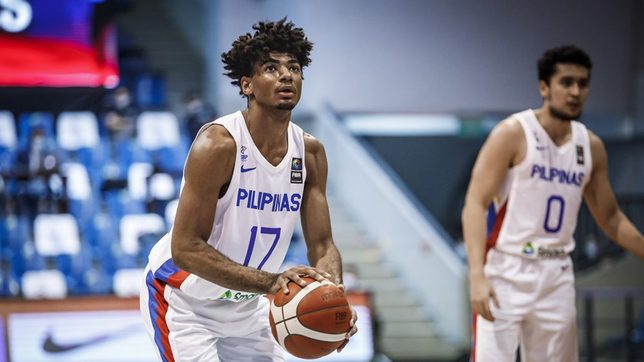 HOTSHOT. LeBron Lopez is set to see action in the US' Overtime Elite.

Facebook Twitter Copy URL
Copied
LeBron Lopez proves the hype surrounding him is very much warranted, with FIBA noting ‘it’s easy to see why there would be much anticipation’ to see the 18-year-old in action again

MANILA, Philippines – Filipino basketball fans have known for a while now that Gilas Pilipinas prospect Francis “LeBron” Lopez is possibly the next big thing, and now, even FIBA has hopped on the hype train by naming him a “wunderkind to watch” in 2022.

After all, the 18-year-old’s potential was tantalizing enough to warrant a national team roster spot at his age, which then immediately got him a six-figure dollar professional contract with Overtime Elite (OTE) in the United States.

“With these accomplishments and a more-than-recognizable nickname like ‘LeBron’, it’s easy to see why there would be much anticipation to see Lopez on the court for the Philippines again,” said the FIBA article.

“While he hasn’t been able to make his debut in the [OTE] league just yet, it will only be a matter of time before we get to see the high-flying youngster put his talents on display.”

In the limited moments where Lopez saw the court, however, he has made it clear why the hype surrounding him and his game is very much warranted.

In his national team debut at the 2021 FIBA Asia Cup qualifiers, the former UAAP Boys’ Basketball Mythical Team member squeezed out 8 points, 5 rebounds, 1 assist, 1 steal, and 1 block in just 10 minutes of a 76-51 Gilas blowout against Indonesia.

Even in his lone high school season with Ateneo back in 2019, the 6-foot-5 freak athlete proved to be a man among boys with averages of 16 points, 9.2 rebounds, and a staggering league-high 3 blocks in just under 26 minutes per game.

“I am so proud and happy that he was presented this opportunity to showcase his talents and skills on an international level,” said his former high school coach Reggie Varilla, who also previously mentored NBA aspirant Kai Sotto.

“I’m elated to see that our local talents are now being recognized around the globe. It bodes well for the future of Philippine basketball. Also, it gives our aspiring basketball players inspiration and hope that they can play on a bigger stage,” he continued.

There is no telling how high the former Blue Eaglet can spread his wings in professional and international basketball competition, but as the game’s top governing body just said, it will only be a matter of time. – Rappler.com