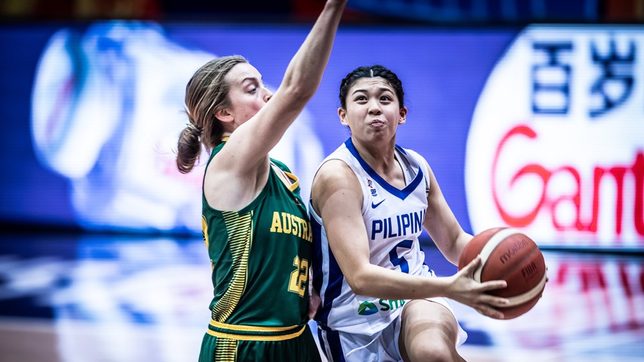 STRUGGLE. Ella Fajardo and the Gilas Women fall to a rough start against Australia.

With another lopsided loss, albeit way better than China’s 91-point annihilation, Gilas is still winless in Group B, and will need to upset Chinese Taipei on Thursday, September 30, 12 am, Manila time, to avoid a relegation match against Group A’s worst team.

Lauren Nicholson and Keely Froling led the Aussie charge with 21 points apiece, while WNBA player Sami Whitcomb flirted with a triple-double off 8 markers, 7 rebounds, and 7 assists in just 15 minutes of action.

Although Gilas Women banked on their triples early on, and got as close as 10, 20-30, late in the first quarter, a 17-0 response through the second frame by the Aussies catapulted the gap to 27 points, 47-20, and only got worse from there.

Once again, a noticeable advantage in height and experience against the Filipinas proved the difference as the Aussies ultimately set their biggest lead at 64 with the final score. They also out-rebounded Gilas by 42, 67-25, and out-assisted them by 17, 27-10.

“It’s really tough. It’s a tough group we’re in, and I think being the smallest among the group, and having a game with those more experienced players, we tried to get there,” said Gilas Women head coach Pat Aquino in the postgame presser.

“We’d like to move on, adjust, and probably just compete. That’s the main purpose here, compete. I think with those two tough games that we’ve had, we’ll have another day of competing.”

Pinay sniper Janine Pontejos put up an admirable fight as she led the losing cause with 13 points built off 3-of-9 shooting from three, while Kristine Cayabyab added 10 markers off the bench in just 13 minutes.

Afril Bernardino, who led the way against China with an all-around 17-point game, was held to just 8 markers against Australia as she fought through a lingering sprained ankle.