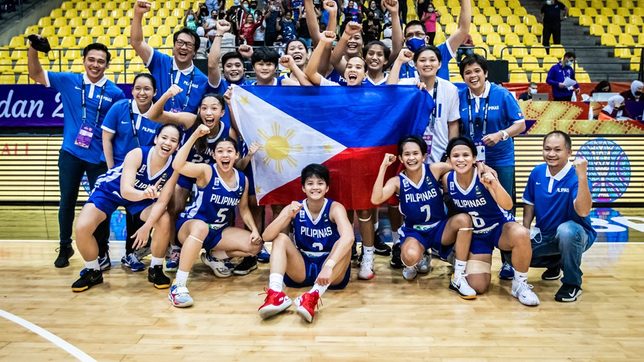 BREAKTHROUGH. The Gilas Women celebrate after a thrilling triumph.

After three demoralizing blowouts to start their 2021 FIBA Women’s Asia Cup campaign, the Gilas Pilipinas Women finally broke through when they most needed it with a hard-earned 74-70 win over India at Amman, Jordan on Thursday, September 30 (Friday, October 1, Manila time).

With the win, the Pinay ballers ended the biennial meet at seventh place, and more importantly, just barely missed out on getting relegated to FIBA Division B had they lost.

Khate Castillo made sure her compatriots won’t leave Amman without a win as she erupted for 22 points off an impressive 7-of-11 clip from three, capped by one last long bomb that put Gilas up 8, 73-65, with 2:38 left in regulation.

The Indians took safer jabs inside in the clutch, and got within four, 74-70, off an and-one play by Shireen Vijay Limaye.

However, they got outworked in the last few seconds as Gilas corralled two huge offensive boards off missed dagger trey attempts by Janine Pontejos and Castillo, which eventually secured the win for the gutsy Filipina group.

“I’m very, very happy with the girls. They didn’t stop competing. I know for the past three games, we were struggling, definitely. But today, I know they played together, and as a team. Good victory for us,” said head coach Pat Aquino in the postgame presser.

“Every time we have a game, I know Khate would be stepping up. I just told her earlier before the game, just play your game, relax, and if you’re open, just take your shot.”

Pontejos, who also topscored with 22 points on a 9-of-22 clip and 4-of-15 from deep, simply thanked the Filipino fans in Jordan and around the world for their constant support.

Afril Bernardino, meanwhile, took a back seat to the team’s snipers, but still flirted with a triple-double off 9 points, 11 rebounds and 7 assists.

Pushpa and Sathiya Senthil Kumar led the losing cause with 15 and 12 points, respectively, while Limaye added 10 markers and 13 boards.