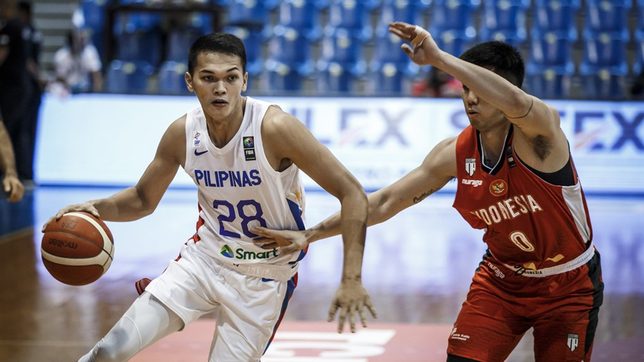 KEY COG. Justine Baltazar flirts with a double-double against Indonesia.

Gilas Pilipinas bucked a horrendous first-half shooting to cruise to a 76-51 win over Indonesia in the third window of the FIBA Asia Cup Qualifiers in Clark, Pampanga, on Friday, June 18.

Dwight Ramos led the way anew with 10 points, 12 rebounds, and 3 steals as the Philippines reasserted its mastery over Indonesia to hike its record to a perfect 5-0 in Group A.

The Filipinos also demolished the Indonesians in the first window, 100-70.

Angelo Kouame chalked up 11 points and 5 rebounds, while Justine Baltazar flaunted his outside shooting with 11 points spiked by two triples to go with 9 rebounds.

Gilas Pilipinas struggled offensively and shot a woeful 28% from the field in the first half as Indonesia stayed within striking distance at halftime, 30-22.

Indonesia even cut its deficit to 4 points, 31-35, to start the third period before the Philippines pulled away off a 15-3 run capped by a Kouame dunk for a 50-34 lead.

Carl Tamayo then opened the floodgates with back-to-back three-pointers early in the final quarter as the Philippines seized a 59-38 advantage en route to the 25-point blowout.

Tamayo, however, left the court shortly after hurting his ankle. He finished with 6 points and 4 rebounds.

RJ Abarrientos followed up his impressive play in the Philippines’ upset of Korea two days ago with 9 points, 6 assists, and 2 steals, while Kai Sotto chimed in 7 points and 7 rebounds in the win.

Eighteen-year-old Francis “LeBron” Lopez – the youngest Gilas Pilipinas member – had a productive debut for the seniors team with 8 points, 5 rebounds, 1 block, and 1 steal in under 10 minutes of play.

Lester Prosper produced 22 points and 8 rebounds to finish as the only player in double figures for Indonesia, which dropped to 1-4 in Group A.