Gold or bust for Gilas Pilipinas is Hanoi SEA Games MANILA, Philippines – Gilas Pilipinas aims for a 14th straight gold medal when competition begins in the 31st Hanoi Southeast Asian (SEA) Games in Vietnam this May.

While the men’s national basketball team remains as the event favorite, a top Gilas official admits there’s still pressure due to the enormous expectations of winning the gold and sustaining the dominance of the Philippines in basketball in the region.

“It’s different when you are the defending champion. It’s like having a big target, bull’s-eye… front and back,” said Gilas team manager Butch Antonio in Filipino during the recent Philippine Sportswriters Association (PSA) online forum.

“The expectation is a gold medal. We can’t afford to lose because there is no other option but to win (the gold medal),” added Antonio, also the deputy executive director of the Samahang Basketbol ng Pilipinas (SBP).

Since recapturing the SEA Games gold medal in 1991 following a heartbreaking campaign in Kuala Lumpur, Malaysia in 1989, the Filipinos have not lost a single bid in the biennial meet.

In fact during the last SEA Games the country hosted, the Philippines won all four basketball gold medals as the men’s team captured its 18th title, while the women’s side bagged the title for the first time. 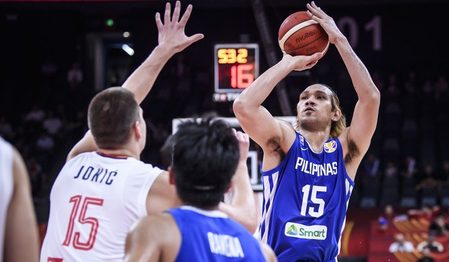 However, similar to all previous editions of the SEA Games, it’s about the all-important gold medal for the Philippines in men’s basketball – a sport considered a “religion” in the country.

Antonio said this is the reason Gilas Pilipinas coach Chot Reyes is eyeing the best possible roster that will defend the title as preparations have already begun with a few more players still set to join.

One of them is Barangay Ginebra’s Japeth Aguilar, who’s availability remains uncertain due to a calf issue. The superstar forward has yet to be in top form after he saw limited minutes in the Kings’ title run in the recently concluded PBA Governors’ Cup.

The players seeing action in the Japan B. League have also yet to join, including the Ravena brothers Thirdy and Kiefer, as well as Dwight Ramos. They’ll only be available by May 8, the reason why the SBP has asked the Philippine Olympic Committee (POC) to extend the deadline in sending their roster for the SEA Games.

Gilas cadet William Navarro, and young guns Caelum Harris and LeBron Lopez round out the list.

“We have yet to give the names, we are in coordination with the POC, which is coordinating with the Vietnam SEA Games Organizing Committee. They are asking (to submit it) this week, but we’re asking for a little more time,” said Antonio.

The submission of the final 12 roster is prior to the departure of the team, unlike in FIBA-sanctioned tournaments when it’s during the managers’ meeting, or a day before the start of the event.

Nevertheless, Antonio said they will bring additional players outside of the 12 that Reyes will name soon as the national team is set to leave for Vietnam on May 13 as the managers’ meeting is set for May 14.

The basketball event in the Hanoi SEA Games is set May 16 to 22. – Rappler.com