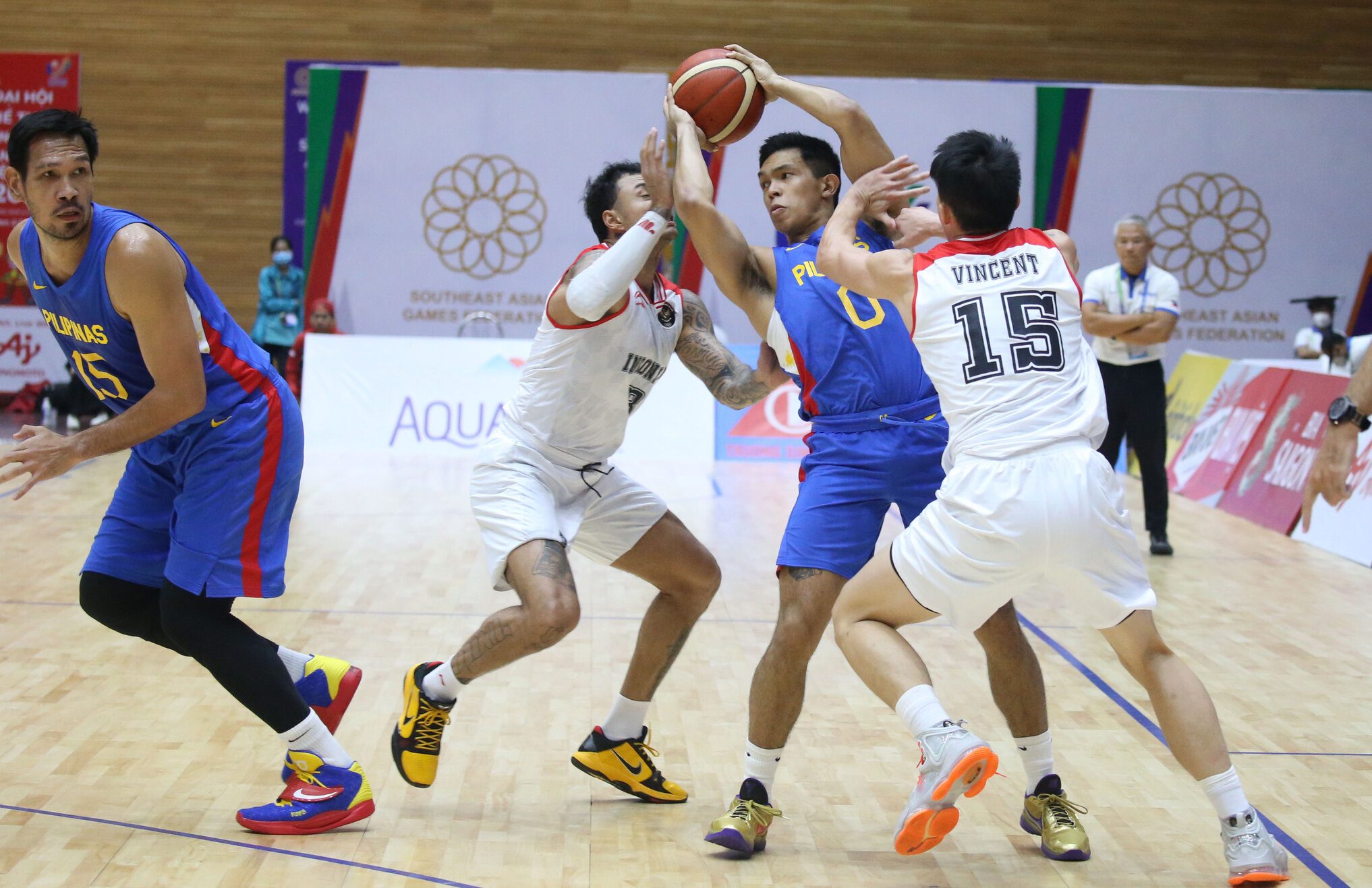 Facebook Twitter Copy URL
Copied
‘There is no silver lining from this defeat. There are no new lessons that we have not already learned many times over in the past.’

MANILA, Philippines – The Vietnam Southeast Asian Games basketball debacle happened months ago, not on May 22 at the Thanhh Tri Gymnasium in Hanoi.

That final Sunday game was but the end result of a series of head-scratching decisions that ultimately led to an  embarrassing 81-85 loss to Indonesia that cost the Philippines the gold medal.

Expect a litany of excuses to be forthcoming from the basketball powers-that-be.

The Gilas Pilipinas team had limited time to practice due to the pandemic.

The absence of Japeth Aguilar, Robert Bolick, and Dwight Ramos.

Indonesia had a naturalized player.

The officiating clearly favored the Indons.

Also expect the usual suspects of apologists to engage in some form of communicative gymnastics that would put Caloy Yulo to shame in their laughable attempt to exculpate the people behind the Samahang Basketball ng Pilipinas (SBP) and the PBA.

One apologist said the solution is to have a solid training program.

As if we all did not know that. As if the country did not have a solid training program just a few months ago until a small group of people arbitrarily decided to scrap the program that was showing a lot of promise.

When the Gilas squad barely won over Thailand in the opening game of the SEA Games, there were already smokescreens citing the vast improvement of the Thais and the rest of the competition in the region.

This is nothing more than a feeble justification that is downright insulting to the Filipino basketball fans.

An all-amateur Gilas team, without naturalized center Angelo Kouame, defeated Thailand two times by an average of 28 points during the FIBA Asia Cup qualifiers on November 2020.

An all-amateur Gilas squad bannered by Kouame and Kai Sotto blasted an Indonesian team that featured naturalized center Lester Prosper, 76-51, less than a year ago.

So, are our basketball officials and the apologists essentially saying that in the last year and a half, countries like Thailand and Indonesia have become better and the Philippines has not?

The Gilas men’s basketball program actually did improve. Tremendously. Impressively. The Gilas team made up of five collegiate players and with no one in the lineup aged above 25 years old, prevailed over arch-nemesis South Korea twice just less than a year ago. That same Gilas roster, minus injured top scorer Dwight Ramos, came close to defeating world No. 6 Serbia in Belgrade last July.

But that program has been dissolved based on another unimaginative excuse by the SBP that there were no players left in the pool.

Wasn’t it SBP’s responsibility to ensure that the 2019 Gilas cadet PBA draftees remained in the national pool? Why were their contracts not renewed? If the SBP could mobilize the likes of Ramos and the Ravena brothers to join the Gilas campaigns in the previous FIBA window and in the SEA Games, why was this option not provided to Tab Baldwin and his Gilas program?

If the SBP really wanted to form a competitive national team under the mentorship of Baldwin, there were still enough players who could have been made available to continue the program.

Instead, they decided to scrap what Baldwin had painstakingly nourished for close to two years and rebuild the Gilas program under a new head coach in Chot Reyes.

How many times does the SBP really need to reboot the Gilas program?

They already did so in 2016 with a Gilas cadets program featuring the likes of Mac Belo, Kevin Ferrer, Roger Pogoy, and Von Pessumal.

They did another restart in 2019. Then another this year.

One wonders whether the people behind the SBP are afflicted with ningas kugon, or they simply are a bunch of sadists who enjoy titillating Filipino basketball fans with promises of glory then watching these same fans suffer in anguish after witnessing the Gilas failures over and over again.

Reyes has apologized for the loss to Indonesia. At least he manned up and admitted his shortcomings.

But an apology will not suffice. He would gain more respect if he had the honesty and humility to admit he is not cut out any longer for the international game and that he is not the man to lead the country’s campaign in the 2023 FIBA World Cup.

In other countries, true leaders would tender their courtesy resignation after the back-to-back Gilas disasters under Reyes’ watch. In our country, we call it delicadeza.

Will the SBP officials also admit that they too are responsible for this catastrophic SEA Games result?

Alas, they have never had a track record of holding themselves accountable to Filipino basketball fans.

They also have not shown a willingness to listen to the sentiments of the Filipino basketball fans. Not when there was outrage when Baldwin was sacked as the Gilas coach. Not when there was overwhelming opposition to the reappointment of Reyes as Gilas coach. Perhaps not even now when there is collective anger about this SEA Games loss which will leave a bad taste in the mouth and will linger for years to come.

There is no silver lining from this defeat. There are no new lessons that we have not already learned many times over in the past.

The postmortem is actually rather straightforward – the people running basketball in this country laid to waste a program crafted by a world-class tactician that already delivered results and that would have prevented this kind of embarrassment. It was a program that could possibly even give us a fighting chance in next year’s FIBA World Cup.