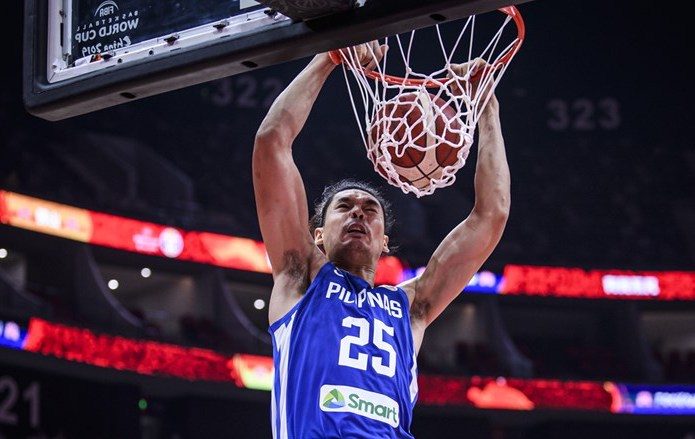 COMEBACK. It has been nearly three years since Japeth Aguilar last suited up for Gilas Pilipinas.

MANILA, Philippines – Japeth Aguilar has come aboard Gilas Pilipinas’ ship as he joined the national team in practice on Sunday, August 21, after being put under health and safety protocols.

His wife, Cassandra, posted a photo on Twitter of Aguilar listening to a huddle.

Aguilar missed almost an entire week of practice as he and his wife tested positive for coronavirus.

If he ever makes the cut for the fourth window of the FIBA World Cup Asian Qualifiers, Aguilar will suit up for Gilas Pilipinas for the first time since he helped the team win a gold medal in the 2019 Southeast Asian Games.

The high-flying forward is coming off one of his finest conferences in the PBA as he averaged 17.1 points, 8 rebounds, and 2.6 blocks for Barangay Ginebra in the Philippine Cup.

Other Gin Kings players in the pool include Scottie Thompson and Arvin Tolentino.

Featuring a mix of PBA star, Japan B. League stalwarts, and amateur standouts, the national team will be bolstered by NBA player Jordan Clarkson and big man Kai Sotto.

Gilas Pilipinas will fly to Beirut on Monday for their August 25 match against Lebanon before they return home to host Saudi Arabia on August 29 at the Mall of Asia Arena. – Rappler.com