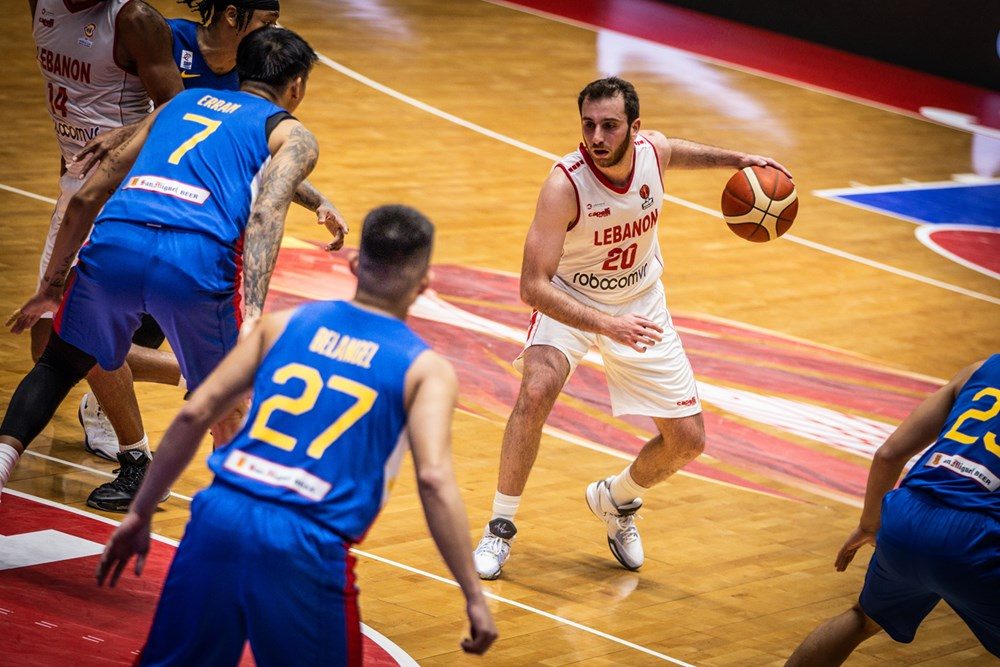 MAN TO WATCH. Lebanon banks on the scoring prowess of Wael Arakji.

Facebook Twitter Copy URL
Copied
The showdown will be a good gauge to see how Gilas Pilipinas, with its big names and star power, will fare against Lebanon, one of the most cohesive Asian basketball teams

MANILA, Philippines – Gilas Pilipinas may be parading one of its most decorated rosters in recent years, but it can’t expect an automatic victory when it takes the floor in Beirut in the the FIBA World Cup 2023 Asian Qualifiers this August.

Even with a lineup bannered by former NBA Sixth Man of the Year Jordan Clarkson of the Utah Jazz, Kai Sotto of the Adelaide 36ers, and Japan B. League stalwarts, Gilas Pilipinas will need to hurdle a Lebanese team that has been on a tear.

Lebanon, too, will enjoy home court advantage in what is expected to be a packed Nouhad Nawfal Sports Complex on Friday, August 26, Manila time. (SCHEDULE: Gilas Pilipinas at FIBA World Cup Asian Qualifiers 2022)

Known as the Cedars, the Lebanese came close to winning the 2022 FIBA Asia Cup last July in Jakarta, where they narrowly lost to Australia in the finals, 75-73. This was just Lebanon’s second loss in 23 games in international competitions since 2019.

The Cedars proved to be clutch in the FIBA Asia Cup, especially in the knockout stage. They beat Chinese Taipei by a point in the playoffs, 97-96, then scraped past China in the quarterfinals by three points, 72-69. In the semifinals, Lebanon edged Jordan by the slimmest of margins, 86-85.

Lebanon’s stellar play can be attributed in large part to the leadership and playmaking of Wael Arakji. Not since the heydays of the legendary Fadi El Khatib has Lebanon had a player who could change the complexion of a ballgame and carry the Cedars on his shoulders.

Nicknamed “The Great,” Arakji was the tournament leading scorer with an average of 26 points a game. He was also the third-most efficient player in the competition.

At just 27 years old, Arakji is already a veteran who has played for the Dallas Mavericks in the NBA Summer League and the Beijing Royal Fighters in the Chinese Basketball Association.

It would be a grave error, though, to deem Lebanon as a mere one-man show.

Similar to Gilas Pilipinas, the Cedars also have a number of standout players of mixed heritage.

Sharing the backcourt with Arakji is 6-foot-4 Sergio El Darwich, who normed 9.8 points in the FIBA Asia Cup. The American-Lebanese averaged in double figures in his last two US NCAA Division I seasons with the Maine Black Bears.

The Cedars also have at trio of behemoths who played US NCAA basketball.

The 6-foot-9 Ali Haidar migrated to Canada in 2006 where he played high school ball before moving to the Michigan Technological University, where he enrolled in an engineering double major program. He was part of the MTU Huskies for four years in the US NCAA Division II and won team MVP honors as a sophomore.

Karim Ezzedine is a 6-foot-9 stretch big man born to a mother from Congo and a Lebanese father. He grew up in France then transferred to the US at 16 years old to pursue basketball. He ended up playing Division I basketball for the University of New Mexico.

The 6-foot-8 Armenian-Lebanese Hayk Gyokchyan learned the ropes playing high school ball in Pennsylvania before enrolling at Division III school Franklin and Marshall for college. He’s the son of Tigran Gyokchyan, the head coach of the Lebenese women’s national basketball team and Armenian club BC Dvin.

Although not of mixed heritage, 6-foot-8 forward Youssef Khayat will be a key piece in the Cedars’ rotation. Turning only 19 years old last March, he’s one of the most promising Asian prospects.

Khayat has been averaging 17.4 points for the Limoges U21 squad in France where he has been playing since 2018 and recently was recruited by coach Juwan Howard to join the famed Michigan Wolverines in the US NCAA.

Lebanon also has a pick of naturalized player between 6-foot-9 power forward Jonathan Arledge, who registered 12.5 points and 6.2 boards in the FIBA Asia Cup, and 6-foot-11 UConn product and the LA Lakers’ 2011 second-round draftee Ater Majok.

As deep as Lebanon’s talent pool is, what makes the Cedars dangerous is how they have been described by analysts as one of the most cohesive teams in Asia.

This was on full display in the FIBA Asia Cup where the Cedars were humming on both ends of the floor.

Lebanon was the fifth-highest scoring team with an average of 86 points per ball game while shooting a tournament third-best 40.3% from three.

The Cedars were also one of the top defensive teams, limiting opponents to 74 points per outing on just 42.5% shooting. Their pesky pressure defense led to 10.8 steals, second-best in the Asia Cup.

The matchup will be a good gauge to see how Gilas Pilipinas, with its big names and star power, will fare against one of the most well-oiled machines in the whole of Asia. – Rappler.com