It is not that Filipino fans want Gilas Pilipinas to win all its games in the international arena. That would be a standard too lofty and rather foolish for even the most rabid fan to expect from the national team.

But it is fair for fans to demand to see Gilas Pilipinas put up a good fight, especially at home. After all, we have seen our national squad do so under coach Tab Baldwin’s watch. We beat South Korea during last year’s FIBA Asia Cup qualifiers, something Gilas squads made up of PBA players failed to do on separate occasions from 2014 to 2018. Baldwin’s version of Gilas which only had one player with pro experience disproved in two games the myth of the Curse of Korea.

So the public outcry after the team’s horrendous performance against New Zealand on Sunday was reasonable and merited. From having a team that almost beat world No. 6 Serbia in Belgrade last year in the FIBA Olympic Qualifying Tournament, we witnessed in Manila seven months later a Gilas squad that could not even be competitive on our home floor against the visiting Tall Blacks who only had two remnants from their 2019 World Cup roster.

More than the fluidity of player and ball movement and the defensive discipline that Baldwin’s squad displayed, what the current iteration of Gilas seemed not equipped with was the mindset ingrained in the players that they had a system to fall back on when individual talent, even collectively, was not enough.

It is this same mindset that Philippine women’s national football team skipper Tahnai Annis mentioned as one of the intangibles that propelled their team to a World Cup berth last February. It is a mentality that they could overcome odds that appeared improbable, and that even if they lose, they would go out on their shield and make the other side earn victory the hard way.

This kind of belief is not instilled in players overnight. It is built on a long, well-thought out program from which emanates the system that would earn the trust and confidence of the players.

We had that kind of program just a few months ago. We had a system that worked and that showed a potential to bring back basketball glory to this hoops crazy country.

That was the system that was discarded by the people running basketball in the Philippines.

Netizens and basketball fans have made their stance known through their chants at the Araneta Coliseum and through their uproar on different social media platforms. They want Baldwin back. They want his system that already has a proof of concept. 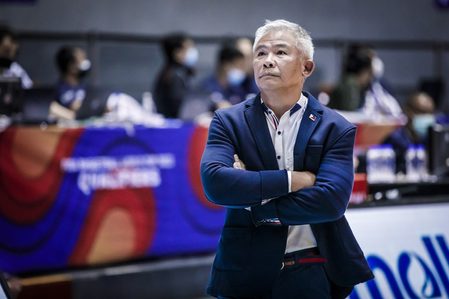 At this point, it may be futile to belabor on why Baldwin was removed from a program that had shown so much promise. The details of his “resignation” have been sketchy at best. But two reasons have been repeatedly given by the powers-that-be.

The first is that he has decided to concentrate on his duties as coach of the Ateneo. This is a rather flimsy reason that tries to paint Baldwin as incapable of multi-tasking. It also suggests that Baldwin’s boss who is the main benefactor of both the Blue Eagles and Gilas is more Atenean than patriotic.

The second reason given is that Baldwin had no players left in the pool because he allowed the core to leave for professional opportunities abroad.

In the 15-man pool that was formed for this FIBA window, there were eight players who were part of Baldwin’s pool. These were Thirdy Ravena, Dwight Ramos, Angelo Kouame, Juan Gomez de Liaño, Will Navarro, Tzaddy Rangel, Francis Lopez, and Jaydee Tungcab

There were five Gilas 2019 PBA draftees – the Nieto twins of Matt and Mike, Isaac Go, Allyn Bulanadi, and Rey Suerte – who should have been signed until the 2023 World Cup, which was supposedly the plan based on previous statements during the infancy of the program. Their contracts expired on January 31 and they eventually signed with their PBA teams.

That would have given Baldwin 13 players to work with. Not much, but it was a start. Baldwin has always emphasized the idea of “next man up” in the Gilas program. That was how even without Ramos against Serbia, we still managed to keep the score close until the dying seconds of the game.

Granting that there were other members of the pool who were not released by their mother schools, they could have been replaced for this window as a stop-gap measure by the TNT players. If that option were available with Chot Reyes as the coach, why would that not be on the table if Tab remained the coach?

Ravena and Ramos disproved in the games against India and New Zealand what our basketball officials have been trumpeting recently – that the Gilas program needs our best players who are in the PBA. The two versatile wingmen have shown how being exposed to more progressive brand of play and training overseas has elevated their level of play.

One bitter truth in Philippine basketball is that the opinion of fans matters very little to the ones who craft the direction of the national team program. Remember these are the very same people who acceded when the PBA only gave the national team 10 full days to prepare for the 2019 FIBA World Cup. In that tournament, Gilas lost five games by an average of 29.4 points.

Remember also that these are the same brilliant minds who practically negated all the gains of the 3×3 program and took over the national team that was given two weeks to train for the Tokyo Olympic qualifiers. That Gilas squad lost all four games by an average of 7.75 points, which in 3×3 parlance is a blowout.

Two major international competitions which brought us national embarrassment. Yet you still have apologists hailing how the pro league bent over backwards for the national cause and thus should be applauded.

There were talks going around that the PBA would not want to be left out of the World Cup picture, that it would find a way to ram its way in and get involved no matter the opposition from basketball fans.

Well, this must be it.

And so once again, we are left helpless while the people running the show continue their apparent disregard for the real stakeholders of the sport – the basketball-loving public.

Meanwhile, we await the laughable attempt of our basketball officials at restoring our pride and dignity as they go all out to win the gold in the Southeast Asian Games. – Rappler.com