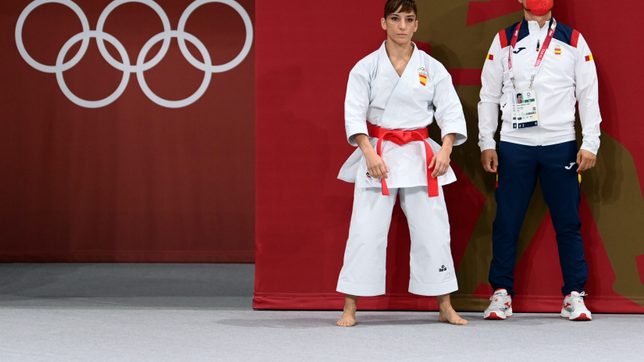 HISTORIC. Sandra Sanchez bags the first karate gold in the Olympics as the sport debuted in Tokyo.

Veteran karateka Sandra Sanchez is used to defying the odds, but the thought that she would celebrate a gold medal and a wedding anniversary with her husband-coach on a historic day for the sport they love was beyond even her wildest imagination.

One month shy of her 40th birthday and 15 years older than her youngest competitor at the Tokyo Olympics, Spain’s Sanchez was once written off as too old for the highest echelons of the sport – including by her coach-turned-partner Jesus del Moral.

But on a memorable day for karate – the discipline made its Olympics debut on Thursday, August 5, at Nippon Budokan, the spiritual home of Japanese martial arts – Sanchez took the sport’s maiden gold in a tough match against hometown favorite Kiyou Shimizu.

“It’s the perfect moment,” Sanchez told Reuters. “It’s Japan, it’s the Budokan, it’s the (wedding) anniversary. Everything was for this moment.”

Sanchez started practicing karate at the age of four alongside her older brother and over her long career has won a record 36 medals in the sport’s top-billed Karate 1 Premier League, earning her a place in the Guinness World Records.

On Thursday, Sanchez and Shimizu each scored 27.86 in their ranking rounds, underscoring just how close the final would be.

Two years ago in the same spot, the perennial rivals had faced off in a rare tie-breaker final at the Karate 1 Premier League. Shimizu took that trophy.

As Sanchez was announced as the winner, her steely gaze melted into a wide-eyed, disbelieving smile as she hurried over to embrace her coach, unable to offer him a kiss over his mask.

“It was a match that maybe most people thought was lost given the perceived hometown advantage for Shimizu,” del Moral told reporters. “But I always said she (Sanchez) can do it. I had faith in her.”

Asked how the couple would celebrate the medal and their five-year wedding anniversary, he said jokingly: “I want to invite her to the Olympic Village for dinner.”

On a more serious note, he had added that he had another job on Friday to support Team Spain’s Damian Quintero in his kata competition.

While her gold medal triumph may be a hard day to top, Sanchez said she was not done with karate yet.

“In three months, there’s a world championship,” she said, referring to the November event to be held in Dubai.

“After that, I’ll decide day by day.” – Rappler.com