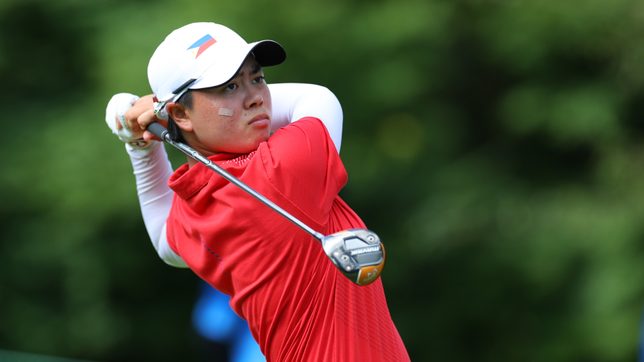 ON TRACK. Yuka Saso stays within reach of another LPGA major title.

Saso nailed a joint fourth finish with three others after nailing a four-under par 68 that was marked by an eagle in the 12th hole.

The Filipina-Japanese rebounded from a bogey in the 2nd hole with back-to-back birdies in the 5th and 6th holes, and one in the 14th hole.

The 2021 US Women’s Open titlist continues her search for a title after her joint ninth finish in the Tokyo Olympics, where she staged a huge rally from an opening round 47th place.

World No. 1 Nelly Korda, No. 4 Sei Young Kim of South Korea, and Sweden’s Madelene Sagstrom opened the major tournament with rounds of 5-under 67.

Korda is riding on her strong momentum after winning three LPGA titles, including the Women’s PGA Championship in June, and the Tokyo Olympics.

The American poured in eight birdies, including on the final two holes, to counteract three bogeys.

Kim, like Korda, is in search of her second major victory. She got going with consecutive birdies on Nos. 6-8, birdied three more on the back nine, and only posted one bogey.

Sagstrom, who also had an early lead in the Olympics, nearly had the outright lead but bogeyed No. 18. She racked up seven birdies while paired with Europe’s Solheim Cup captain, Catriona Matthew of Scotland. – with reports from Reuters/Rappler.com