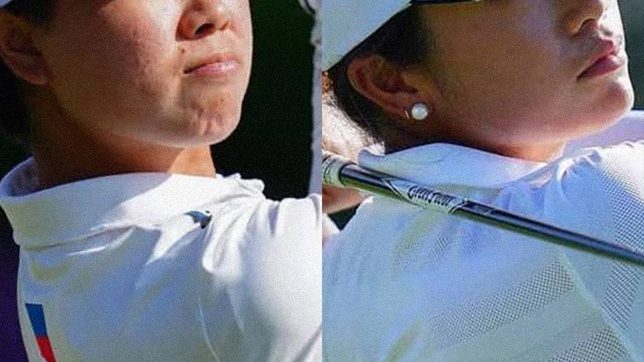 National Golf Association of the Philippines

Facebook Twitter Copy URL
Copied
Yuka Saso soars in the final round to finish at joint 9th, while Bianca Pagdanganan falls to 43rd in their maiden Olympic golf campaigns

Yuka Saso cemented her huge comeback from 47th place in the opening round to soar to a joint 9th finish, while Bianca Pagdanganan failed to bounce back and wound up tied at 43rd at the end of the Tokyo Olympics women’s golf tournament on Saturday, August 7.

Saso jumped 11 places in an impressive rally highlighted by three straight birdies starting in the 12th hole, and an eagle in the 17th that gave her a six-under par 65 score in the final round.

The 2021 US Women’s Open champion finished the tournament with a 10-under par 274, seven strokes away from gold medalist Nelly Korda of the US.

She was tied with five others at 9th, bannered by South Korean stars Jin Young Ko and Sei Young Kim, and Japanese Nasa Hataoka, the runner-up to Saso in the 2021 US Women’s Open.

Meanwhile, Pagdanganan dropped 14 places for a 43rd place finish after opening the tournament at joint 7th.

The 23-year-old power player birdied the 8th, but committed bogeys in the 1st and 12th holes, and capped off her maiden Olympic stint with a double bogey in the last hole.

She hit a three-over par 74 in the final round and ended with a one-over par 285 at the end of four rounds.

Korda took the tournament by storm and shook off the tense race for the gold medal to win by one stroke off a total of 17-under par 267.

It was a sweep for the US in the Tokyo 2020 Olympics golf tournament as compatriot Xander Schauffele bagged the gold in the men’s side.

Japanese Mone Inami made history for her country as the first Olympic medalist in the sport as she battled in a playoff for the silver with New Zealand’s Lydia Ko, who settled for the bronze.

There was no fairytale finish for India’s Aditi Ashok as she fell short of a podium finish by one stroke. – with a report from Reuters/Rappler.com