The Philippines ended its gold-medal drought in the Olympics and it is all thanks to Hidilyn Diaz.

Diaz etched her name in Philippine sports lore after bagging a historic gold in the Tokyo Olympics with an inspiring victory in the women’s 55kg weightlifting on Monday, July 26.

(I could not believe that I won this. I was surprised that I was able to pull it off. God is great.)

Finishing the snatch with 97kg, Diaz went toe-to-toe for the gold in the clean and jerk round against world record holder Liao Qiuyun of China.

Liao upped the ante with a lift of 126kg on her final clean and jerk attempt to take the lead with a total of 223kg, but Diaz did not want to settle for silver just like she did in the 2016 Rio de Janeiro Games.

With nothing to lose, the pride of Zamboanga City attempted and cleared an Olympic record of 127kg on her final clean and jerk try as she captured the gold with a total of 224kg, which is also an Olympic record.

(To be honest, I was nervous thinking that I would not be able to do it. But for the whole day, the whole week, I told myself, ‘I believe, I believe.’ I was prepared today.)

Diaz endured several hardships on the way to her fourth straight Olympic appearance. 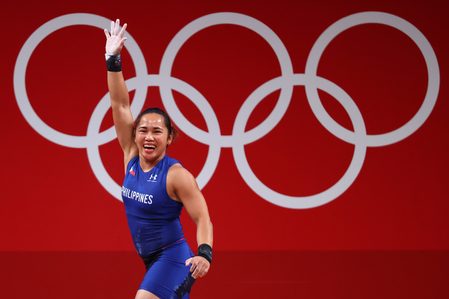 The 30-year-old said she had to leave school to focus on training and spent years without seeing her parents as she stayed dedicated to her goal of winning the Philippines its first Olympic gold medal.

While training, Diaz feared for her life when President Rodrigo Duterte named her in his infamous ouster matrix two years ago.

Diaz also revealed that she struggled with monetary problems for her Olympic buildup, humbly asking big corporations and sports backers for financial support.

Fast forward to 2020, Diaz got stuck in Malaysia due to the coronavirus pandemic as she was forced to stay in shape for the Tokyo Games within the bounds of her condominium.

She, though, hurdled all of those obstacles with the help of Team HD (Team Hidilyn Diaz), which is composed of head coach Kaiwen Gao, strength and conditioning coach Julius Naranjo, nutritionist Jeaneth Aro, and sports psychologist Karen Trinidad.

(Life was hard at that time but I was able to pull through together with the team. I’m really thankful. I know that God has his reasons for everything I went through.)

Diaz also expressed her gratitude to her compatriots who prayed and cheer for her as she competed in Tokyo.

(Thank you so much for believing in me. Despite all of the times that I wanted to give up because of all the challenges I had to experience, we were able to do it as Filipinos.) – Rappler.com