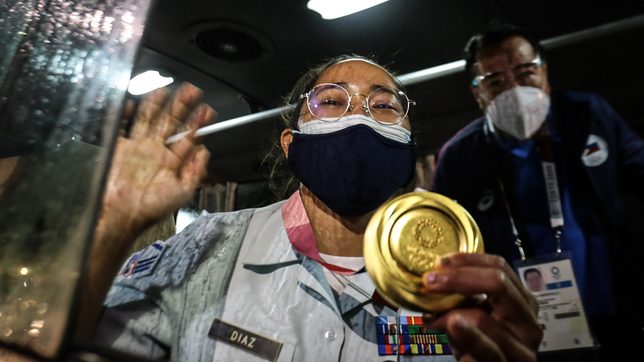 RICHER. Hidilyn Diaz's Olympic gold medal has made her a multi-millionaire.

Facebook Twitter Copy URL
Copied
The additional incentive raises Hidilyn Diaz's cash windfall from the government to P20.5 million, not including other cash rewards and benefits from tycoons and companies

Hidilyn Diaz is set to receive an additional P5 million from the government after setting two Olympic records on her way to winning a historic gold medal in the Tokyo Games.

Diaz currently owns the Olympic records in clean and jerk and total lift in the women’s 55kg division, which made its Olympic debut in Tokyo.

In order to beat world record holder Liao Qiuyun of China to clinch the Philippines’ first Olympic gold medal, the pride of Zamboanga City cleared 127kg in clean and jerk for a total lift of 224kg.

Under Republic Act 10699 or the expanded incentives act, national athletes who surpass Philippine record or ranking in any measurable international tournament like the Olympics shall be given cash incentives, the amount of which may be determined by the Philippine Sports Commission (PSC).

PSC commissioner Celia Kiram confirmed in a press release that the P5 million has already been approved, signed, and ready for release.

Duterte said he will also gift Diaz a house and lot in Zamboanga.

On top of that, Diaz will get P10 million each from tycoons Manny Pangilinan and Ramon Ang, P5 million from businessman Dennis Uy, and P3 million from Deputy Speaker of the House Mikee Romero.

Other rewards include a house and lot from Century Properties, a condominium unit from Megaworld Corporation, and lifetime free flights from Philippine Airlines and AirAsia. – Rappler.com