MANILA, Philippines – Just a couple of years before Hidilyn Diaz etched her name in Philippine sports lore as the country’s first Olympic gold medalist, the weightlifting star feared for her life.

Diaz – who, by then, already made history as the country’s first female Olympic silver medalist – couldn’t believe how she got linked to a destabilization plot against the administration of President Rodrigo Duterte.

The “ouster plot matrix,” a diagram showing individuals the Duterte government claimed were out to undermine his rule, had Diaz worrying amid her preparation for the Tokyo Olympics in 2019. It was, after all, released by presidential legal adviser and then presidential spokesman Salvador Panelo.

Although the issue was eventually swept under the rug, and Diaz chose to forgive, it was just one of the several sports-related controversies the Duterte administration faced.

Also on that list was the Philippines’ hosting of the 2019 Southeast Asian Games, which was marred by corruption allegations and logistical problems in the lead-up to the regional showpiece.

Yet it was also under Duterte’s administration where Filipino athletes enjoyed the most international success, and the government, along with the private sector, rewarded them bountifully.

Under Duterte’s term, the country’s grassroots program likewise firmed up with the establishment of the National Academy of Sports (NAS).

The last six years seem like a mixed sporting bag for the country.

Some have already labeled the period as Philippine sports’ “golden years” as the national athletes marked historic feats in all major international competitions – the Olympics, world-level events, the Asian Games, and the Southeast Asian Games.

Historically, though, the Philippine Sports Commission (PSC), the government’s sporting arm, always had run-ins with the country’s top athletes.

So it was more of the same the past years, with coaches and athletes complaining of late or measly allowances and lack of support in the buildup to their major competitions.

While this usually gets resolved after an issue turns into social media fodder – as in the case of Diaz’s own preparation for the Tokyo Olympics – the PSC, led by chairman William “Butch” Ramirez, and other government arms were always quick to celebrate and rain rewards on the athletes’ major feats.

Duterte, particularly, gave out hefty bonuses on top of the incentives Filipino medalists are guaranteed under Republic Act 10699 or the National Athletes and Coaches Benefits and Incentives Act.

For example, RA 10699 doubled the award of P5 million for an Olympic gold medal listed in the previous Sports Benefits and Incentives Act of 2001 to P10 million.

Diaz took home nearly P60 million for her golden lift in the Olympics, with Duterte chipping P3 million from the budget of the Office of the President.

The President threw in a fully furnished house and lot, perhaps a way to make up for the stress and worry the ouster plot mishap caused Diaz as Duterte asked her to “just let bygones be bygones.”

Duterte also made it rain rewards in the 2019 SEA Games, with the country claiming the overall championship at home soil after bagging 149 golds, 117 silvers, and 121 bronzes.

Duterte repeated the gesture for the delayed 2021 SEA Games in Vietnam, doubling all incentives provided in the law as the Philippines secured fourth place, its best finish – excluding its hosting in 2005 and 2019 – in the biennial meet since 2003 with a haul of 52 golds, 70 silvers, and 105 bronzes.

World champion gymnast Carlos Yulo emerged as the big winner after winding up as the Philippines’ most bemedaled athlete in both SEA Games, raking in P2.95 million in bonuses from Duterte alone.

“You did a good job and I’m very happy with the results,” Duterte said during his courtesy call for SEA Games medalists earlier this June. “Just like a father to every Filipino, I am very proud of you.”

Even sports heroes like retired boxer Onyok Velasco got a windfall of P500,000 as compensation for the unfulfilled promises he was given after winning silver in the 1996 Atlanta Olympics.

As much as Duterte gave the athletes their much-needed recognition and attention, he seemed to turn a blind eye on the corruption allegations and irregularities that tarnished the 2019 SEA Games, especially those involving his allies.

The SEA Games cauldron proved to be the most infamous symbol of these controversies as Senator Franklin Drilon questioned its hefty price tag of P55 million.

Drilon argued that the budget for such an extravagant project could have been used for more important things such as classrooms. 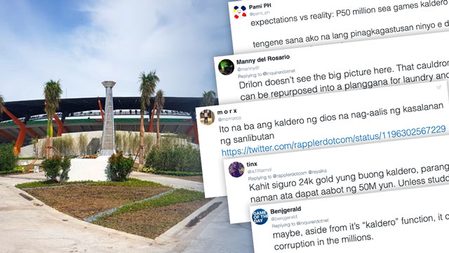 Citing that it was a “product of the mind,” Duterte defended the cost of the cauldron and cleared his 2016 running mate Alan Peter Cayetano – who served as chairman of the Philippine SEA Games Organizing Committee (PHISGOC) – of corruption.

Another opposition senator, Risa Hontiveros, raised concerns on possible SEA Games corruption as she called for an investigation of the joint venture agreement between the Bases Conversion Development Authority and Malaysian firm MTD Capital Berhad, which built the sports facilities at the New Clark City in Tarlac.

The BCDA, a controlled cooperation under the Office of the President, allegedly helped MTD Capital Berhad secure a loan worth P9.5 billion from government-owned Development Bank of the Philippines to finance its share of the project. (READ: BCDA, Malaysian firm ink questionable P11-billion SEA Games deal)

More controversies followed when the SEA Games came off the wraps as guests witnessed the construction and renovation of some of the venues used for the competition.

At one point, a partially done hall served as a press conference room for some of the men’s football games.

Visiting athletes also complained of transportation and accommodation delays as they were made to wait for hours for their buses and hotel rooms. A dismayed Duterte, according to Panelo, wanted a probe of the SEA Games blunders.

These issues, however, were eventually forgotten as the Philippines dominated its hosting for its biggest medal haul in SEA Games history.

A year after the SEA Games, Malacañang took a hands-off approach on the alleged corruption by leaving it to the House of Representatives’ Committee on Good Government and Public Accountability to decide whether it will conduct an investigation.

For a leader who promised zero tolerance for even a “whiff of corruption,” Duterte contradicted himself with his inaction.

As the likes of Diaz, Yulo, and pole vaulter EJ Obiena have proven throughout the last six years, Filipino athletes are capable of making waves in the international scene when provided with proper and continuous support.

In line with this, Duterte signed Republic Act 11470 in June 2020 to establish the National Academy of Sports, a government-run high school that aims to be the next breeding ground of world-class Filipino athletes.

Construction of the NAS campus at the New Clark City started in October last year and completed earlier this year, a product of Duterte’s flagship Build, Build, Build program that fast-tracks the implementation of infrastructure projects.

“I am very happy that along with our high schools for sciences and high schools for the arts, it is high time that we should have high schools and institutions specifically focusing on sports so that our learners and our people can start valuing the importance of physical fitness, physical preparation, and endurance, as well as combining them with academic work,” said outgoing Education Secretary Leonor Briones.

Staying true to its goal of producing Olympic athletes, the NAS launched with eight sports that are being played in the Games: aquatics, athletics, badminton, gymnastics, judo, table tennis, taekwondo, and weightlifting.

Qualified student-athletes will be given a full scholarship, free board and lodging, monthly allowance, school and training uniforms, and gadgets.

Even indigenous peoples and persons with disabilities will be accommodated by the NAS. “It is my hope and prayer that the pioneer batch of student-athletes become world-rounded Olympians and champions who will carry our flag in the international sports arena and inspire a deep sense of patriotism among Filipinos,” Duterte said in his inspection of the NAS campus this June.

As Duterte exits office, the NAS is seen as a way to future-proof Philippine sports and further build on the gains made during what is regarded as the country’s “golden years.”

“I am ever conscious that it is my duty to protect the young. That is why I had no hesitation and I was very happy to sign the law that would pave the way for this to evolve into something, which is really beautiful and magnificent to me,” Duterte said. – Rappler.com