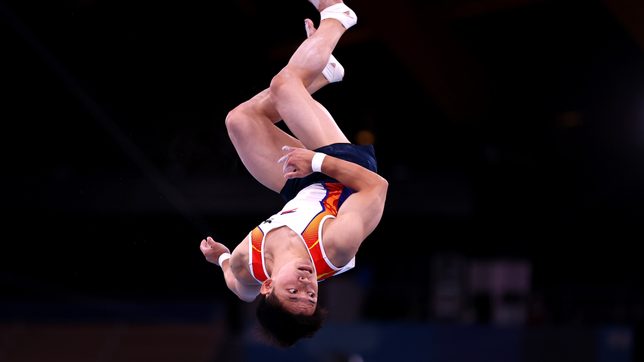 BRIGHT FUTURE. Carlos Yulo shines on the big stages against top guns of the sport.

Facebook Twitter Copy URL
Copied
'For him to qualify to an event final in his first year at such a young age, it's just encouraging for the Philippines'

At 21 years old, Carlos Yulo was the youngest gymnast competing in the Tokyo 2020 Olympics men’s vault final on Monday, August 2.

Given that his competition was dominated by veterans like three-time Olympian and multiple medalist Denis Ablyazin of Russia, Yulo finished fourth place in his maiden Tokyo Olympics stint, and many believe that there will be more chances for him on the big stage.

“Many of the younger gymnasts are usually just there for the experience one, and then obtain a few more years and maybe be a finalist,” said Gymnastics Association of the Philippines Women’s Technical Committee member and international judge Linzi Arellano-Co in an interview with Rappler.

“But for him to qualify to an event final in his first year at such a young age, it’s just encouraging for the Philippines.”

Yulo nailed a final score of 14.716, falling short of a fraction of a point at 0.017 from bronze medalist Artur Davtyan of Armenia.

The 4-foot-11 dynamo recorded a 14.566 in his first attempt after drawing a -0.1 penalty for his landing, but he rebounded with a 14.866 in the second attempt to pull up the average score.

South Korea’s Shin Jeahwan and Ablyazin scored a winning average of 14.783, but the former took home the gold after registering a higher score in an attempt.

According to Arellano-Co, for Yulo to come close to these podium finishes, the score is already “world-class.”

“The deductions given to him for that second vault was just point 0.7 or 0.8 and it’s the average score of the judges. In gymnastics, you can deduct a lot of things, so to get a 0.7 or 0.8 deduction for execution is really world-class,” explained Arellano-Co.

The Filipino’s second attempt was also the second highest score among all attempts behind Turkey’s Adem Asil’s performance that recorded 15.266.

Yulo and his team had already set targets for the Paris Olympics in 2024, but Arellano-Co hopes that more Filipino gymnasts get to qualify for the biggest stage in sports.

“We always hope to continue on, but you can never really say because it’s still another qualification process to it,” said Arellano-Co.

“We will still have to work hard, and hopefully qualify other gymnasts.”

The Filipino gymnast became the country’s first world champion in the men’s floor exercises in 2019.

Yulo was the most bemedalled Filipino athlete in the 2019 Southeast Asian Games, bagging two golds and five silver medals.

Since 2016, Yulo has been training in Tokyo, Japan with coach Munehiro Kugimiya, along with the top gymnasts in the Olympics host country. – Rappler.com