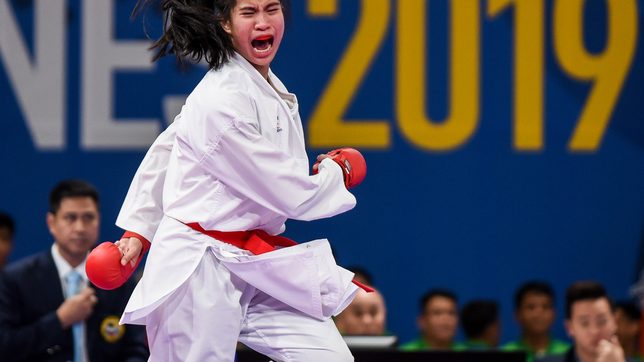 Karate Olympic hopeful Jamie Lim remains determined to nail a berth to the Tokyo Games because of her father Samboy Lim’s fighting spirit.

According to Lim, the PBA legend continues to be cared for by nurses in a condominium during the coronavirus pandemic.

“Thank God he’s still healthy right now. He’s in a condo with some nurses, so the nurses are there 24/7. And he’s okay, he’s stable,” shared Lim during the recent Philippine Sportswriters Association (PSA) forum.

“He’s still bedridden, but he’s been fighting ever since 2014 so we’re thankful that he’s a fighter.”

In November 2014, Samboy “The Skywalker” Lim collapsed in an exhibition game held in ULTRA, Pasig, and was in coma for two months before getting stable enough to go back home to his family.

Now, Lim has a chance to make the postponed quadrennial meet in the world Olympic qualifiers in Paris, France to be held in June 2021.

“I’m going make sure that I’m in the best shape possible at that time, so I won’t use this [pandemic] as an excuse to rest or make it like a timeout. I’m gonna use it to my advantage.” – Rappler.com