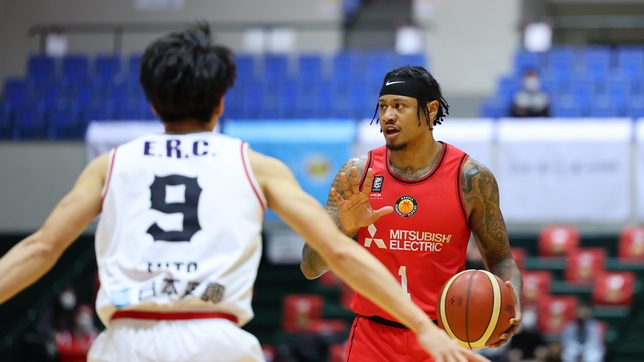 WINNING RECORD. Ray Parks and Nagoya notch their 15th win of the Japan B. League season.

Facebook Twitter Copy URL
Copied
Ray Parks and Nagoya extend their winning streak in the Japan B. League, while the struggles of Thirdy Ravena and San-En continue on Christmas Day

MANILA, Philippines – Ray Parks and the Nagoya Diamond Dolphins celebrated Christmas Day with an emphatic 84-53 victory over the Kyoto Hannaryz in the Japan B. League on Saturday, December 25, at the Dolphins Arena.

Parks came up with only 5 points, 3 rebounds, and 1 assist in the 31-point blowout, but finished with a team-high +27 in the plus-minus department for Nagoya, which stretched its winning streak to six games and improved to 15-7 in the standings.

Leading by only a point, 19-18, at the end of the opening frame, the Dolphins shifted into high gear in the second period and outscored the Hannaryz, 20-9, for a 39-27 halftime lead.

Kyoto managed to cut the deficit back to single digits, 56-49, at the end of the third quarter, before the Dolphins unleashed a furious 17-0 run in the first seven minutes of the final frame to stretch their lead to 24, 73-49, and pull away from the Hannaryz for good.

Justin Harper and David Simon had 13 points apiece for Kyoto, which dropped its second straight game and moved down to 3-19 in the standings.

Parks and the Dolphins will look to complete a weekend sweep when they lock horns once again with the Hannaryz on Sunday, December 26, at 2:05 pm (Manila time).

Meanwhile, in another Christmas Day showdown, Thirdy Ravena and the San-En NeoPhoenix suffered an embarrassing 97-69 loss to the Seahorses Mikawa at the Wing Arena Kariya.

Ravena put up 10 points on an efficient 5-of-9 shooting, along with 6 rebounds, 3 assists, and 2 steals for San-En, which absorbed its 14th straight loss and slipped further down the standings with a 3-19 record.

Trailing by only 7 markers at halftime, 42-49, San-En failed to keep in step with Mikawa in the third frame as the Seahorses pushed their lead to double-digits, 76-60, before entering the payoff period.

It was all Seahorses from there on as they even managed to extend their advantage to as many as 31 points, 97-66, with 1:07 left in the game.

Davante Gardner exploded for 28 points, to go with 11 rebounds and 4 assists, while Jarrod Uthoff chipped in 20 points and 9 rebounds for Mikawa, which moved up to 13-9 in the standings.

Yoshiyuki Matsuwaki and Elias Harris scored 13 points each for San-En, while Robert Carter added 11 points in the losing effort.

Ravena and the NeoPhoenix will get another chance to snap their long and painful losing skid when they face the Seahorses anew on Sunday at 2:05 pm (Manila time).

Finally, over at the White Ring, Javi Gomez de Liaño and the Ibaraki Robots captured their fourth win of the season after taking down Matt Aquino and the Shinshu Brave Warriors, 79-67.

Gomez de Liaño, who is coming off a scoreless outing for the Robots, delivered 6 points, 6 rebounds, and 1 assist in the victory as they improved their record to 4-18.

Aquino, on the other hand, failed to make the most of his limited playing time as he tallied just 2 rebounds in 7 minutes of play for the Brave Warriors, who dropped to 9-13 in the standings.

The Robots and the Brave Warriors will clash once again on Sunday, also at 2:05 pm (Manila time). – Rappler.com