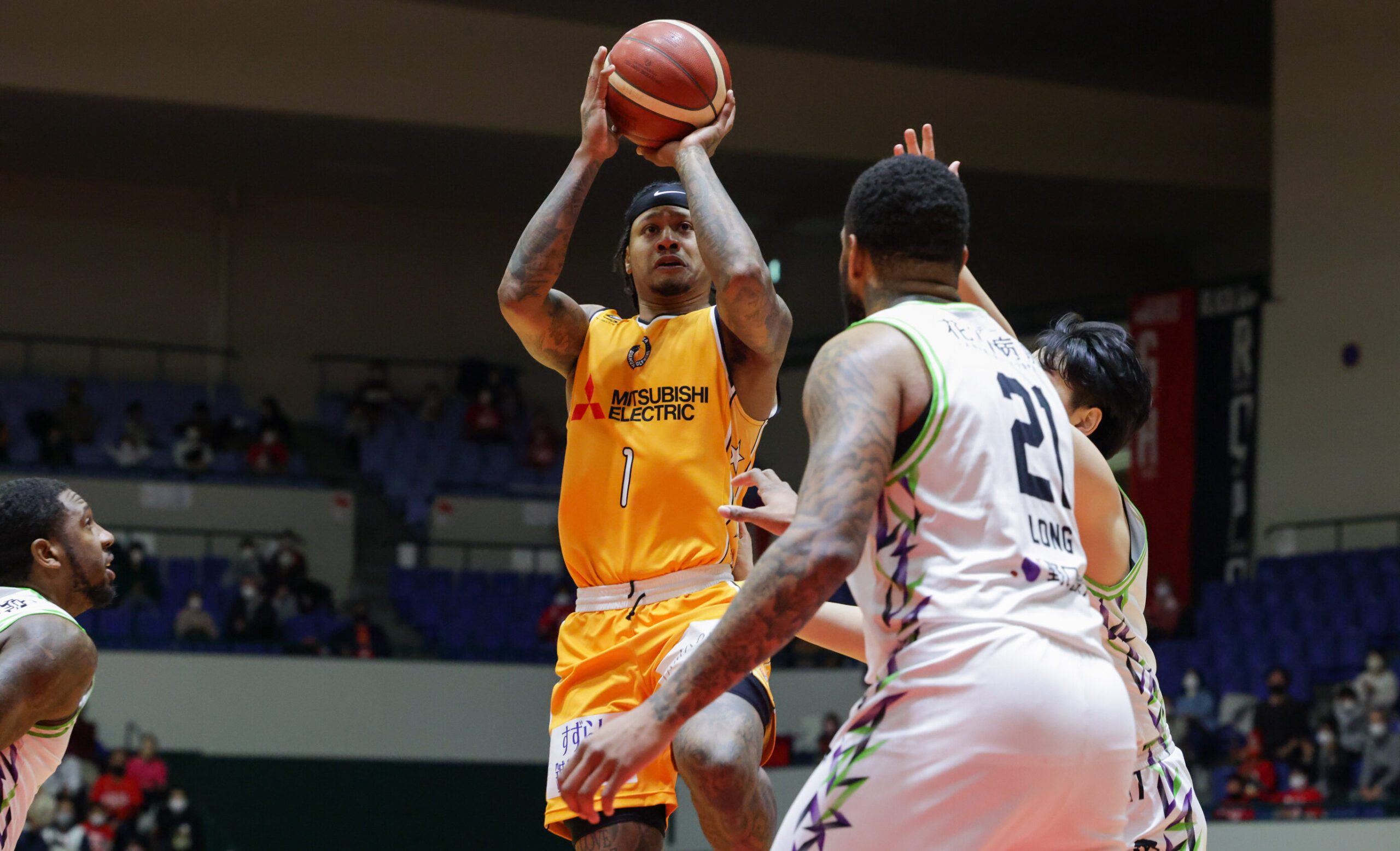 CLICKING. Ray Parks and the Nagoya Dolphins secure their 20th win of the season.

Facebook Twitter Copy URL
Copied
Ray Parks and the Nagoya Diamond Dolphins make it two wins in a row as Dwight Ramos and the Toyama Grouses fall short of completing a weekend sweep in the Japan B. League

MANILA, Philippines – Ray Parks and the Nagoya Diamond Dolphins picked up their second straight win as they took down the visiting Levanga Hokkaido, 89-77, in the Japan B. League on Sunday, January 23 at the Dolphins Arena.

The Dolphins managed to hold off a late Levanga rally as they captured their 20th win of the season and remained as one of the top teams in the league with an impressive 20-8 record.

Coty Clarke led the way for Nagoya in the victory with an all-around game of 28 points, 9 rebounds, and 4 assists, while Takumi Saito also came up with a well-rounded stat line of 17 points, 4 rebounds, and 8 assists.

Meanwhile, Parks, who only scored 1 point in their 30-point victory against the same opponents on Saturday, January 22, stayed quiet offensively and tallied only 4 points on 2-of-5 shooting from the field, to go along with 5 rebounds, 1 assist, and 1 steal for the Dolphins.

Already leading by as many as 19 points, 51-32, early in the third quarter, the Dolphins failed to sustain their hot momentum as the Levanga trimmed the deficit to single digits, 54-60, heading into the final frame.

In the fourth period, Hokkaido even managed to cut Nagoya’s lead to just 4, 69-65, with 5:04 remaining in the game, before the Dolphins unleashed a decisive 6-0 run to push their advantage back to double figures, 75-65, crushing any hopes of a Levanga comeback with only 3:05 left to play.

Shawn Long topscored for Hokkaido in the losing effort with 27 points, while De’mon Brooks and Ryoma Hashimoto added 16 markers apiece.

The Dolphins will shoot for their third straight win when they face the powerhouse Alvark Tokyo on Wednesday, January 26, at 6:05 pm, Manila time.

In contrast to Parks’ Dolphins, Dwight Ramos’ Toyama Grouses fell short of completing a weekend sweep as they dropped to the Seahorses Mikawa, 76-70, at the Wing Arena Kariya.

Ramos also continued to stay silent on the offensive end, scoring just 8 points on 3-of-6 shooting, to go with 1 steal for the Grouses, who moved down to 11-19 in the standings.

With the Grouses trailing by just 3, 68-71, with 42 seconds left in the game, Satoshi Nagano delivered a crucial layup for the Seahorses with 36 seconds remaining to stretch their lead to a two-possession game, 73-68, which put Toyama away for good.

Davante Gardner led the charge for Mikawa with 27 points, while Ryogo Sumino and Nagano finished with 15 and 10 points, respectively.

Joshua Smith paced Toyama with a double-double of 14 points and 14 rebounds, while Naoki Uto and Brice Johnson contributed 12 and 10 points, respectively.

The Grouses will look to get back on the win column when they go up against Kiefer Ravena’s Shiga Lakestars on Wednesday at 6:15 pm, Manila time.

Also in Division 1, the Ibaraki Robots, who are playing minus their Filipino import Javi Gomez de Liaño, absorbed a 90-60 demolition by the visiting Hiroshima Dragonflies.

For the second game in a row, Gomez de Liaño wasn’t part of Ibaraki’s active roster as his team fell to its fifth consecutive loss and remained at No. 19 in the standings with a 5-23 record.

The Robots will also be in action on Wednesday as they take on the Gunma Crane Thunders at 6:05 pm, Manila time. – Rappler.com