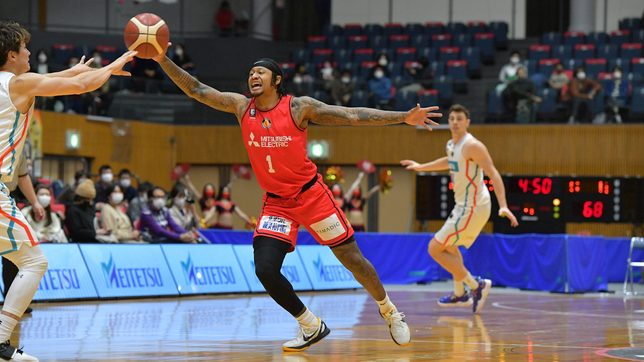 The Dolphins are now winners of four of their last five games as they rose up to 9-6 in the standings, while the powerhouse Magic slid down to 10-5.

Although Shimane stuck within striking distance deep into the final frame, Nagoya got the separation it wanted in the clutch off a small 7-0 blitz led by local guard Takumi Saito for a 77-69 lead at the 1:25 mark.

Parks then put the finishing touches with a cold-blooded dagger triple for the 80-71 gap with 47 ticks left.

Top Magic import Reid Travis led the losing cause with a 22-point, 11-rebound double-double as they now prepare for revenge in the Sunday, December 5 rematch at 2:05 pm, Manila time.

Dwight Ramos, meanwhile, did not have the same hot streak like his fellow Fil-Am Parks as the visiting Ryukyu Golden Kings blew out the Toyama Grouses, 91-66.

Coming off an ice-cold outing in his team’s final Emperor’s Cup appearance, the Gilas Pilipinas prospect limped to a line of 6 points, 4 rebounds, and 2 assists as the Grouses went down to a 4-11 record.

It was a steady, consistent rise all game long for the powerhouse Kings as they turned a 29-21 first-quarter lead to a 48-34 gap at the half.

Ryukyu then quickly shut the game down in the third period as longtime PBA import Allen Durham sank back-to-back jumpers to peak his team’s lead to 26 points, 66-40, with 3:52 left in the frame.

Durham led six Kings in double-digit scoring with 20 points and 13 rebounds in just 24 minutes as they rose to a league-best 12-3 record.

Ramos and Toyama, though, hope to avert a weekend sweep as they gear up for a Sunday rematch at 5:05 pm. – Rappler.com