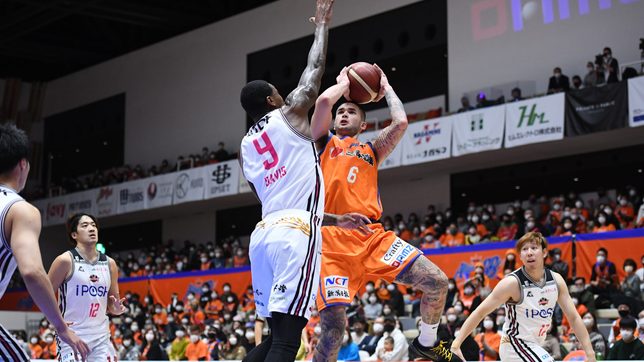 MANILA, Philippines – Kobe Paras and the Niigata Albirex BB’s long and tragic losing skid extended to 14 games as they bowed to the Sunrockers Shibuya, 79-70, in the Japan B. League on Saturday, December 11 at the Aoyama Gakuin Memorial Hall.

Paras’ shooting struggles continued as he finished with just 3 points on a dismal 1-of-6 shooting, to go with 3 rebounds, 1 assist, and 1 block for the Albirex BB, who dropped their 14th straight game and slipped further down the standings with a 2-15 record.

Coming off an embarrassing 31-point loss to the Akita Northern Happinets, Niigata came out with guns blazing and built a 16-13 lead over Shibuya at the end of the opening period.

The Sunrockers, however, proved why they are one of the strongest teams in the league as they unleashed a massive 29-12 run in the second frame for a comfortable 42-28 advantage at halftime.

Niigata managed to climb back midway through the fourth period, cutting the deficit to just 2, 64-62, but Shibuya uncorked another furious run to put its lead back to double-digits, 76-66, which put the Albirex BB away for good with just 2 minutes remaining in the ball game.

Rosco Allen tallied a double-double of 24 points and 12 rebounds for Niigata, while Tshilidzi Nephawe contributed 13 points and 7 boards.

Paras and the Albirex BB will get another chance to snap their losing streak on Sunday, December 12, when they clash once again with the Sunrockers at 2:05 pm, Manila time.

In another Division 1 match, Matt Aquino and the Shinshu Brave Warriors suffered a heartbreaking 90-87 loss to the Gunma Crane Thunders at the Ota City Sports Park Gymnasium.

Shinshu’s Anthony McHenry knocked down a three-pointer in the following possession to cut the deficit to just 1, 87-88, but Justin Keenan quickly responded with two free throws to ultimately seal the win for Gunma.

Aquino, the Filipino-Japanese big man, made the most out of his limited playing time as he grabbed 2 rebounds and finished with a plus-minus of +2 in less than 4 minutes of action for the Brave Warriors, who have now lost three in a row and dropped to 9-8 in the standings.

They will look to get back on the win column on Sunday, when they face the Crane Thunders once again at 2:05 pm, Manila time.

Meanwhile, in Division 2, the Kemark Cariño-less Aomori Wat’s absorbed a 78-61 loss to the Fukushima Firebonds at the Horaiya Koriyama Gymnasium.

The Wat’s, who remained at the bottom of the standings with a 2-18 record, will collide with the Firebonds anew on Sunday at 12:30 pm, Manila time. – Rappler.com