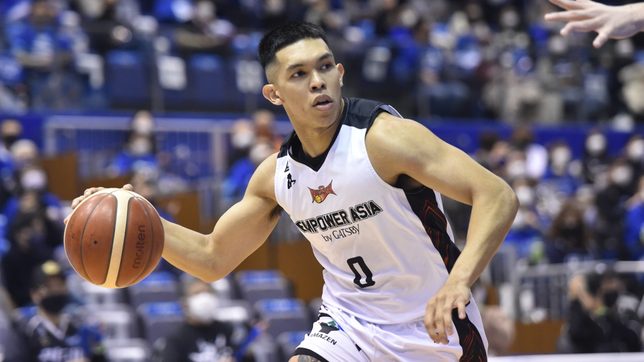 CRUCIAL. Thirdy Ravena comes up big as San-En snaps out of its funk.

MANILA, Philippines – Thirdy Ravena and the San-En NeoPhoenix halted their 14-game losing streak with a rousing 88-80 victory over the Seahorses Mikawa in the Japan B. League on Sunday, December 26, at the Wing Arena Kariya.

Ravena came up big in the win as he dropped all of his 11 points in the second half alone, to go along with 4 rebounds, 4 assists, and 1 steal in 20 minutes of action as a starter for the NeoPhoenix, which finally returned to the win column and improved to 4-19 in the standings.

Coming off an embarrassing 28-point Christmas Day loss to the same opponents on Saturday, the NeoPhoenix managed to keep in step with the Seahorses as they only trailed by 2 points, 53-55, entering the final frame.

It was a tightly contested battle in the opening minutes of the payoff period and with Mikawa trailing 77-80 with 1:11 left to play, San-En’s Yoshiyuki Matsuwaki sank a crucial three-pointer to push the NeoPhoenix’s lead to a two-possession game, 83-77, ultimately sealing the deal with only 58 seconds remaining.

Justin Knox topscored for the NeoPhoenix with 20 points, to go with 9 rebounds, while Elias Harris added 19 points, 7 rebounds, and 5 assists.

Jarrod Uthoff led the way for the Seahorses with a game-high 26 points, along with 11 rebounds, while Yudai Nishida and Davante Gardner contributed 14 and 13 points, respectively.

Ravena and the NeoPhoenix will look to make it two in a row and finish the year with an upset as they take on the league-leading Ryukyu Golden Kings on Wednesday, December 29, 6:05 pm (Manila time).