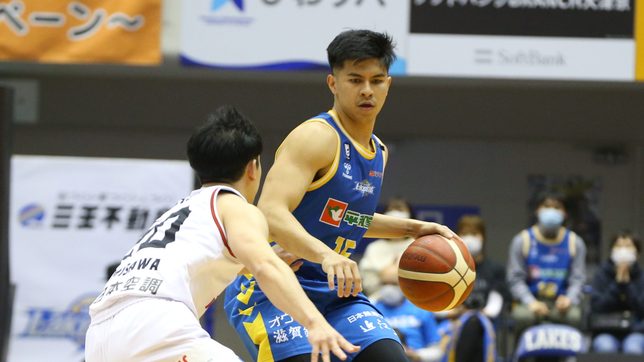 MANILA, Philippines – The Shiga Lakestars averted the start of a new losing streak in the Japan B. League as they sent the Niigata Albirex BB to its 19th straight defeat off a 78-59 Christmas Day blowout on Saturday, December 25.

Kiefer Ravena snapped a three-game streak of scoring 20-plus points and plummeted to just 2 markers on 1-of-5 shooting with 3 assists and 3 turnovers in nearly 22 minutes off the bench.

But more importantly, the Gilas Pilipinas star still had a hand in Shiga’s second win in three games shortly after halting an 11-game skid for an 8-14 record.

Ravena’s fellow Filipino import Kobe Paras likewise had a quiet outing in the highly-anticipated matchup, finishing with 6 markers on 2-of-2 shooting from downtown, 3 boards, and 4 turnovers in just 13 minutes.

Even before Ravena left the bench in the first quarter, the Lakestars already set the tone for the rest of the game as they responded to Paras’ opening trey with a massive 15-0 run for a 15-3 lead with 4:25 left.

Both teams then continued to move the game along without major involvement from their respective Filipino imports as the Lakestars steadily increased their insurmountable gap to as high as 24, 67-43, with 7:31 left in the final frame.

The Albirex can avoid hitting the 20-game mark in their league-worst skid with a much-needed rematch win on Sunday, December 26, at 2:35 pm (Manila time).