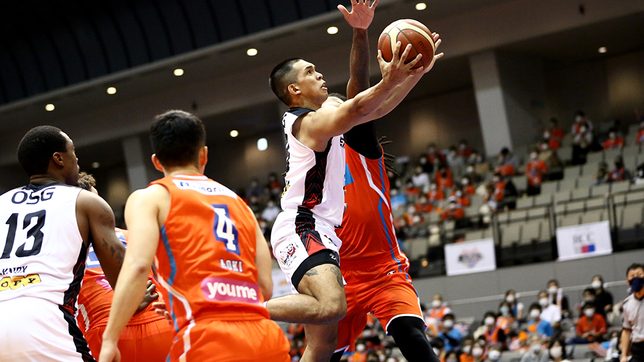 Facebook Twitter Copy URL
Copied
Thirdy Ravena winds up with one of his worst shooting outings yet in the Japan B. League

The Hiroshima Dragonflies denied Thirdy Ravena and the San-En NeoPhoenix a bounce-back opportunity as they staged a late rally for the 84-72 home win on Sunday, October 17.

Naoto Tsuji led all scorers with 28 points on 8-of-12 shooting, 5-of-9 from three, and 7-of-7 from the free-throw line while compatriot Ryo Terashima added 18 markers and 6 assists.

On the other end, Ravena had one of his worst shooting outings yet in the B. League as he limped to a line of 12 points on 5-of-14 shooting, 1-of-8 from three, and 1-of-4 from the free-throw line with 2 rebounds and 2 assists.

It was a subpar, winless weekend overall for the B. League Pinoy pioneer after he was also clamped to just 7 markers in a 67-76 loss to Hiroshima less than 24 hours earlier on Saturday, October 16.

Sunday’s game was no different for the NeoPhoenix as they had to claw their way back with a late 13-3 run capped by an Elias Harris dunk at the 3:24 mark of the final frame just to get within 5, 68-73.

However, the local duo of Tsuji and Terashima had no intention of letting their home fans down as they conspired for a game-sealing 11-1 response to pull away with an 84-69 lead, punctuated with a Tsuji dagger trey with 24 ticks left.

Harris led the losing cause with 19 points, 6 rebounds, and 4 steals on 7-of-12 shooting, while fellow import Justin Knox chipped in 15 markers on a 6-of-9 clip.

San-En will get two chances to rise from the ashes next weekend as Ravena is likely set to face old college foe and B. League debutante Javi Gomez de Liaño of the Ibaraki Robots on Saturday and Sunday, October 23 and 24.