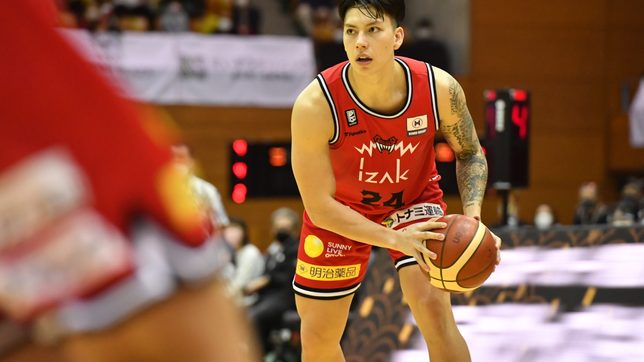 PICKING UP. Dwight Ramos and the Toyama Grouses find their groove in back-to-back wins.

Dwight Ramos and the Toyama Grouses notched their second straight win in the Japan B. League after taking down Thirdy Ravena and the San-En NeoPhoenix, 92-77, on Saturday, November 13 at the Toyama City Gymnasium.

In a highly anticipated showdown between the two former Ateneo Blue Eagles and Gilas Pilipinas stalwarts, Ramos outdueled Ravena as he finished with 15 points on a very efficient 7-of-10 shooting, 3 rebounds, and 1 assist for the Grouses in 22 minutes of action.

Ravena, on the other hand, also delivered a decent performance for the NeoPhoenix in the losing effort, tallying 13 points, 3 assists, and 1 rebound in 27 minutes of play.

With the win, the Grouses improved their record to 3-10 – tied with the NeoPhoenix, who have now lost five games in a row.

After trailing by one point, 39-40, at halftime, Toyama’s offense suddenly came alive in the third period as it outscored San-En, 32-14, for a comfortable 71-54 cushion heading into the final frame.

It was all Grouses from there on as they even managed to stretch their lead to as many as 20 points, 92-72, off a three-pointer by Ramos with 1:18 left in the game.

Five players scored in double-digits for Toyama, with Julian Mavunga leading the way with 22 points, to go with 7 rebounds and 6 assists.

Former TNT import Joshua Smith, meanwhile, contributed a double-double of 21 points and 11 rebounds for the Grouses in the victory.

Robert Carter topscored for San-En with 16 points, along with 7 rebounds and 6 assists, while Justin Knox added 11 markers and 6 boards in the loss.

Ramos and the Grouses will look to complete a weekend sweep when they clash once again with Ravena and the NeoPhoenix on Sunday, November 14 at 12:05 pm, Manila time.