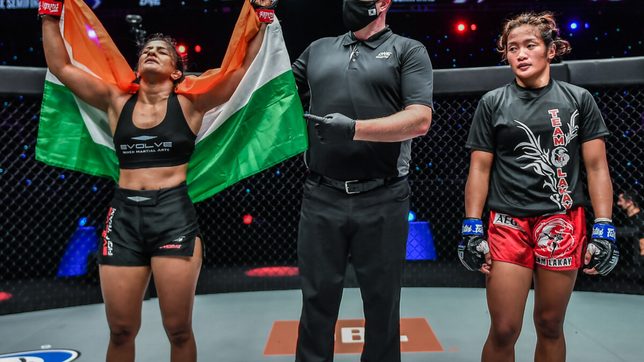 Another Filipina dropped out of the ONE Women’s Atomweight Grand Prix as Jenelyn Olsim (5-3) absorbed a decision loss against Indian star Ritu Phogat (7-1) in ONE: NEXTGEN on Friday, October 29 at Singapore Indoor Stadium.

Olsim, who stepped in the Grand Prix’s semifinals after Itsuki Hirata was forced to sit out due to injury, had hoped to pull off a surprise.

But Phogat hardly struggled despite the last-minute change and completely overwhelmed the Filipina fighter out of Team Lakay.

Still, Olsim proved she’s worth of a semifinal spot as she actively look for submissions despite having her back on the ground. Olsim also landed a high knee that made Phogat step back in the first round.

But the opening minutes didn’t end well for Olsim as the referee momentarily stopped the action and warned the Filipina for throwing upkicks on a grounded opponent.

The Indian wrestler quickly pulled away and controlled the last 10 minutes of the fight with her grappling. Phogat opened the second round with a huge slam takedown, then sealed her spot in the finals with some late ground and pound.

Phogat will face Stamp Fairtex in the Grand Prix Finals, while Olsim bowed out like fellow Filipina Denice Zamboanga, who suffered a controversial loss in the quarterfinals against Seo Hee Ham last September.

Olsim had secured a spot in the Grand Prix as an alternate fighter after her win against Bi Nguyen last August.

Meanwhile, Jeremy “The Jaguar” Miado (10-4) came out with guns blazing and sealed his one-sided rivalry against Miao Li Tao with another impressive KO.

Now donning the flag of Marrok Force, the Filipino fighter completely dominated his Chinese foe in their rematch all thanks to his on-point and powerful jabs, which dictated the pace early in the fight.

Miado never stopped stepping on the gas in the second round and answered Miao’s cry for an illegal eye poke with a barrage of strikes that forced the referee to step in and stop the fight.

This was Miado’s first back-to-back victory since joining ONE Championship. Back in 2019, Miado shut the lights out of Miao with a well-timed flying knee in the opening round of their bout.