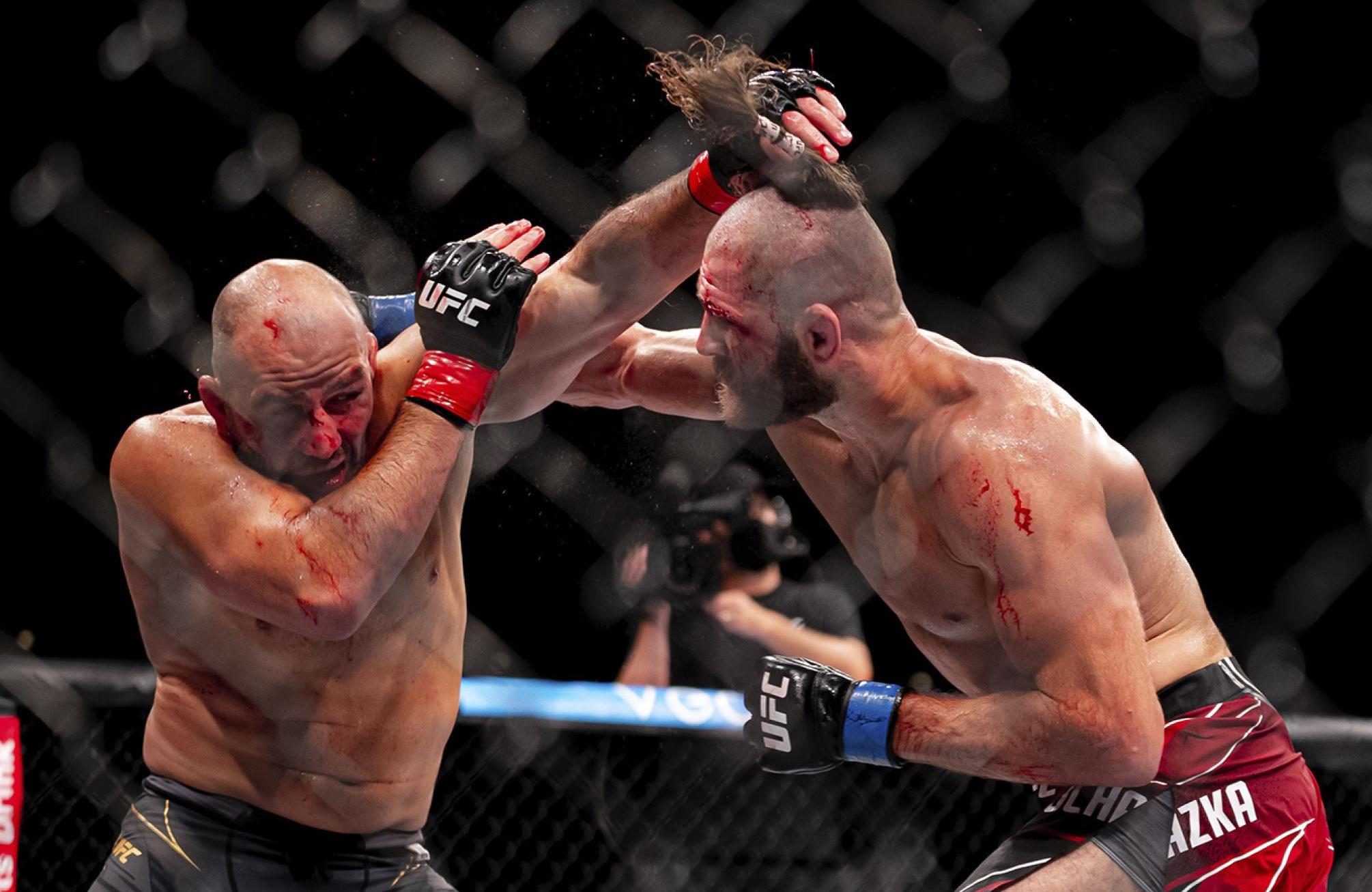 SINGAPORE – Jiri Prochazka was down on the scorecards when he went into the last minute of the final round of his championship bout against reigning UFC light heavyweight kingpin Glover Teixeira.

The Brazilian champ, Teixeira, led on two judges’ scorecards at 39-37 and 38-37, with the third judge scoring the last four at an even 38-38 going into the fifth round. That last round, like previous ones, was characterized by a rollercoaster of exchanges. The Czech contender mostly dominated the stand-up game with his unorthodox striking to stun his opponent multiple times, while the champ favored his wrestling and jiu-jitsu game setup by excellent counterpunching, mixing them up with veteran savvy.

The story of this fight was highly contested in the interstitial positions. That no-man’s land against the cage or in the thick of jockeying for dominant position to rain down ground and pound. Teixeira easily slid into full mount and threatened with submissions. Prochazka would miraculously defend and reverse. But towards the end, it appeared a foregone conclusion on the scorecards that the champ would retain his belt.

So, it was to everyone’s amazement inside the Singapore Indoor Stadium that Prochazka sent out a Hail Mary rear-naked choke sans hooks and got back an amen. Hearing thousands of people collectively gasp is a visceral experience. Teixeira tapped. The crowd lost its mind. With 28 seconds left in the match, “Denisa,” the former street brawler, had finished the Brazilian jiu-jitsu black belt.

“I don’t think that was my best performance,” mused Prochazka, shaking his head after the fight, wearing a Japanese kimono and his signature top knot still intact. “I thought going into the last [round], man it’s not so fine. You have to end it. I like to keep the fight by my will and so I said let’s do something [to get the finish]. And the choke came.”

Though Prochazka ripped his own performance, the new light heavyweight champ had nothing but respect for his Brazilian opponent, confessing that Teixeira’s boxing power and grit surprised him.

“I knew I was going to be the champ before the fight. But I never imagined that Glover would be such a tough opponent.”

UFC 275’s main event on Sunday, June 12, their first pay-per-view event in Southeast Asia, was later awarded the Fight of the Night, and it was certainly an instant classic of furious exchanges and dramatic escapes with a superb denouement.

Capturing the UFC’s light heavyweight crown sees Prochazka, the former Rizin FF champ and former soccer hooligan who had once sought out nightly fights in his hometown of Brno in the Czech Republic, improve his impressive MMA record to 29-3-1, with 25 of those wins coming via KO.

The new UFC champ and his current life of almost monastic austerity is certainly a far cry from the local Czech tough who had racked up more than a hundred street fights before he turned to combat sports, dedicating his life to the principles contained in “The Book of the Five Rings” by Miyamoto Musashi. Those Bushido ideals are what Prochazka follows strictly today, almost religiously, since he considers the text his own version of the Bible or the Koran.

That championship main event is already being billed as an early contender for Fight of the Year awards, while the rest of the UFC 275 card delivered plenty of definitive wins. It also saw the organization break tradition to hand out a high number of $50,000 bonuses. These Performance of the Night awards included all fighters who had finished their opponent, including Silvana Gomez Juarez, Hayisaer Maheshate, Jack Della Maddalena, and Jake Matthews.

In the co-main event, reigning flyweight champ Valentina Schevchenko defended her belt against surging Brazilian contender Taila Santos in a technical and grueling back and forth five-rounder.

Though sometimes lackluster in action, the tide seemed to turn in the champ’s favor after Santos suffered what was later revealed as a broken orbital bone under the right eye as both women clashed heads early in the third. Schevchenko took advantage of Santos’ impaired sight to ride the rest of the bout to a successful split decision win on the judges’ scorecards.

“I left my heart and soul inside the Octagon,” said Schevchenko. “And I always want to fight until the end, which for me is what defines a true champion.”

The former strawweight champ Zhang Weili was also awarded a Performance of the Night for her KO of her rival Joanna Jedrzejczyk. Early in the second round, Zhang ended an intense striking exchange with a spinning backfist that hit Jedrzejczyk in the neck with terrific impact, sending her into unconsciousness before her body even hit the canvass.

“That was natural. Spinning attacks were always something that we trained for so that was a very organic combination for me,” said Zhang.

Zhang vs Jedrzejczyk was one of the most highly anticipated bouts on the card, a rematch of their 2020 Fight of the Year. And now that Zhang has left no doubt about her fighting superiority, it highly suggests that this win sets her up to challenge current division champ Carla Esparza.

Jedrzejczyk announced during her Octagon interview that she was hanging up her gloves after that loss.

“Now it’s time to fully enjoy life. It’s been a rollercoaster and I’ve been traveling [to fight] since I was 17,” Jedrzejczyk said to media in the post-fight presser.

This sees Jedrzejczyk retiring from the fight game after almost two decades of being a veteran in combat sports, duking it out in muay thai and kickboxing on the European and Asian circuits before making her MMA debut in 2014.

“[Retirement] was something I was considering since last year that wasn’t really formed yet, just ‘Oh if something happens maybe I can go by then?’” Jedrzejczyk continued. “I hope when they look at my career and see where I’m from – a small town in Poland – and who I was as a small girl dreaming about a trip to the United States, it gets people to believe that they can work hard for their dreams to become real.”

The former strawweight champ also disclosed she still plans to be working in the MMA industry, most likely in athlete management. “I want to be around the sport and going forward I want to be the best manager I can be.”

According to UFC executives, the UFC 275 event was sold out at more than 10,000 ticket buys and scored a Singapore Indoor Stadium record for gate attendance. – Rappler.com

Karl R. de Mesa is a fight analyst and longreads journalist who has reported on stories in the Philippines, Myanmar, Hong Kong, and Singapore. His new book is “Calling Out the Destruction: Meditations on Violence and Transcendence,” available from Rebo Press.