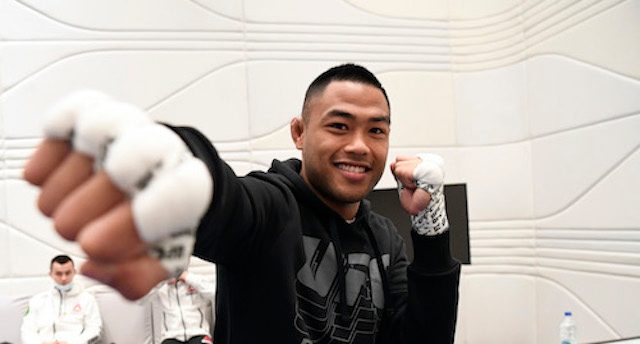 Filipino-Australian Josh “Kuya” Culibao has learned a valuable lesson in his young UFC career: never leave the fight for the judges to decide.

Culibao yearns to notch his first win inside the octagon as he tangles with Chinese Yilan Sha in a lightweight bout that will serve as one of the undercards of UFC Fight Night: Font vs Garbrandt in Las Vegas on May 22.

Undefeated in his first eight professional fights, the 26-year-old has yet to pull off a victory in the UFC.

He suffered a second-round stoppage loss to American Jalin Turner in his UFC debut in February 2020 and settled for a split draw with Canadian Charles Jourdain in October 2020.

“This fight, I’m not looking to leave it in the hands of the judges. I do not want them to decide whether I win or lose,” Culibao told Rappler in a video conference facilitated by UFC Asia.

Aside from bagging his maiden UFC victory, Culibao is also determined to end a two-year win drought.

“It has been a while since I’ve actually had my hand raised,” Culibao said. “It is a bit frustrating. But it is something I’m looking forward to – having my actual first win in the UFC.”

“I plan on absolutely dominating this fight from start to finish,” he said.

“Hopefully, this guy has a chin so I can go three rounds because I’m planning to put some serious damage on this guy.”

Even though born and raised in Australia, Culibao – whose father is from Pampanga and whose mother is from Boracay – still keeps in touch with his Filipino roots.

“It is a massive thing for me to be able to have the Philippines and Australia on my back,” Culibao said.

“To me, it is a massive blessing on my part where I’m able to hopefully inspire the next generation of Filipino MMA fighters.”

In fact, Culibao made kuya (older brother) his moniker even if he is the youngest of four siblings.

Once he clinches that coveted UFC win, Culibao already has an idea how he will celebrate.

“Maybe after the fight, I’ll have some Filipino food, especially adobo, that is my go-to.” – Rappler.com