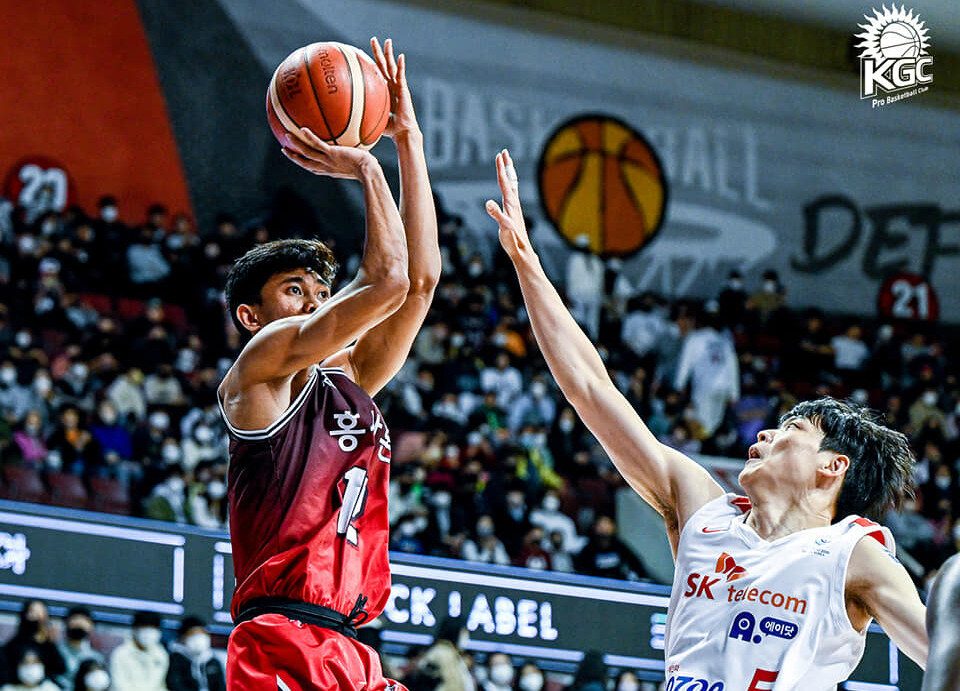 BACK IN FORM. Rhenz Abando returns to dropping double-digit numbers for Anyang KGC.

MANILA, Philippines – Rhenz Abando rebounded from a quiet 5-point showing and propelled the Anyang KGC to a 90-84 triumph over the Seoul SK Knights for their fifth straight win in the Korean Basketball League (KBL) on Sunday, November 27.

After struggling in Anyang’s 86-79 come-from-behind victory over the Goyang Carrot Jumpers last Friday, where he shot just 1-of-6 from the field, Abando got his groove back offensively and dropped 21 points on 9-of-12 shooting, connecting on 3 of his 4 attempts from long distance.

The NCAA Season 97 MVP also tallied 5 rebound and 5 assists in close to 31 minutes of action for Anyang, which upped its league-best record to 13-3.

Former Golden State Warriors and Atlanta Hawks forward Omari Spellman scored 21 markers as well for Anyang, to go along with 12 boards and 5 dimes.

Like Abando, RJ Abarrientos and Ethan Alvano also came up with high-scoring performances for their respective KBL squads on Saturday, November 26.

Abarrientos exploded for a game-high 22 points on 8-of-15 shooting, together with 7 rebounds, and 5 assists in the Ulsan Hyundai Mobis Phoebus’ 85-68 drubbing of the Jeonju KCC Aegis.

Meanwhile, Alvano’s all-around stat line of 20 points, 5 rebounds, 7 assists, and 3 steals went down the drain as the Wonju DB Promy bowed to the Knights in a tight one, 85-81.

Abarrientos’ Ulsan remained tied with Goyang at the No. 2 spot with a 9-5 slate, while Alvano’s Wonju slipped to 6-9.

Finally, Justin Gutang made the most of his 16-minute playing time for the Changwon LG Sakers in their 83-71 victory over the Suwon KT Sonicboom on Saturday.

Gutang had 2 points, 5 rebounds, and 4 assists for Changwon, which captured its second straight win and moved up to 7-6 in the standings.  – Rappler.com