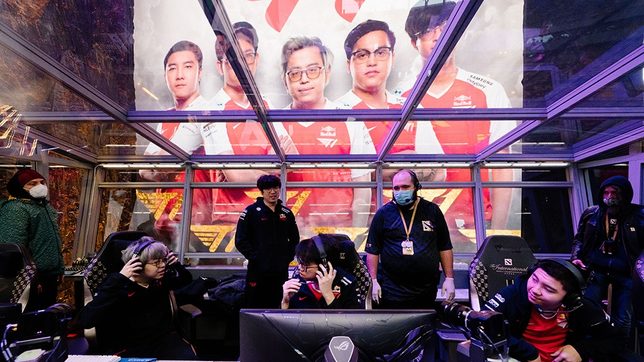 LAST EIGHT. Carlo 'Kuku' Palad and T1 make it to the top eight of The International 10.

Carlo “Kuku” Palad and Karl “Karl” Baldovino of T1 wound up as the last Filipinos standing in The International 10 after Abed “Abed” Yusop and Evil Geniuses suffered a stunning exit on Thursday, October 14.

Southeast Asia powerhouse T1 advanced to the third round of the lower bracket and guaranteed itself of a top-eight finish after making quick work of European squad Alliance, 2-0, in their best-of-three series.

Meanwhile, Abed and Evil Genuises got the boot following a heartbreaking 1-2 loss to Chinese crew Vici Gaming as they collapsed in the last two games after nailing the opening match.

It was a disappointing turn of events for the North American giants, given that Evil Geniuses topped the 2021 Dota Pro Circuit rankings in total points.

Evil Geniuses settled for runner-up finishes in the ONE Esports Singapore Major and WePlay Animajor earlier this year after succumbing to Chinese squads Invictus Gaming and PSG.LGD, respectively.

T1 and Vici Gaming will tangle in the lower bracket on Friday. – Rappler.com