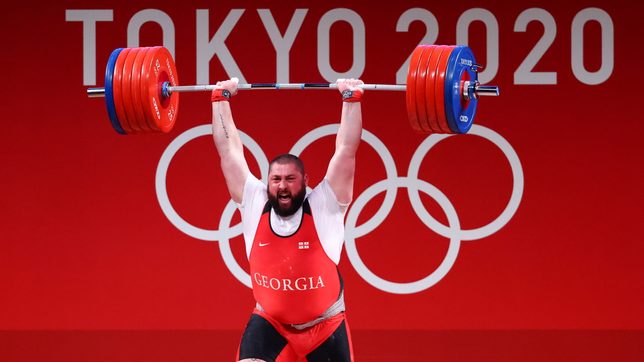 Georgian strong man Lasha Talakhadze broke his own world record to retain the title in the men’s heaviest weight class at the Tokyo Olympics on Wednesday with a combined lift of 488 kg.

Talakhadze, who won a gold at the 2016 Rio Games in the same category, lifted 223 kg for the snatch and 265 kg for the clean and jerk to also break his own world records in the two categories.

“I feel pretty good – I have just gained a second Olympic gold medal and of course I have also set another world record,” Talakhadze said through an interpreter.

“We were for a long time looking forward to the Olympics and to win this gold.”

His total was 47 kilos more than Iran’s Ali Davoudi, who took silver in the men’s +109 kg class. Syria’s Man Asaad took the bronze with 424 kg.

Talakhadze dominated the field from the beginning. He was the last lifter to start both the snatch and the clean and jerk, and made three consecutive attempts for each.

In his third snatch, Talakhadze initially called for 221 kg, one kilo shy of his world record. Crowds cheered when he increased the weight to 223 kg and made the lift.

He chose to lift 265 kg in his third clean and jerk, one kilo more than his world record, without hesitation. The sound of camera shutters echoed throughout the arena as he made the attempt and succeeded again.

Talakhadze, who becomes the first Georgian athlete to win multiple Olympic gold medals in any sport, aims to compete in the Paris Games in 2024.

The sport is facing the risk of removal from the Games over persistent doping issues. Talakhadze said that offenders should get what they deserve but that the sport should be included in the Paris Games.

“Those who deserve punishment should be punished and weightlifting should remain in the program,” he said. – Rappler.com