MANILA, Philippines – The Philippines has seen a parade of stars in the field of athletics through the years. Names like Simeon Toribio, Miguel White, Mona Sulaiman, Josephine dela Viña, Isidro del Prado, Elma Muros, Eric Cray, and now, EJ Obiena, have all shone brightly on the international arena as they brought home honor and prestige to a country that too often has a short window of remembrance for its athletic heroes.

Hers is a legacy that is enduring, her prominence not fading in the annals of Philippine sports despite the passing of time.

An athlete becomes a star by virtue of her achievements. De Vega’s long list of accomplishments has mostly been untouched even after close to three decades since she ran her last race.

She made national headlines in 1981 as a fresh-faced, spritely 16-year-old who, in just her second appearance in the SEA Games, won two gold medals, one of them in Asian record-breaking fashion in the women’s 200 meters.

De Vega wound up winning a total of nine SEA Games gold medals her entire career, the last two coming in the 1993 edition in Singapore.

But it was in a bigger stage, the Asian track scene, where her exploits captivated not just the Philippines but the entire continent.

She is only the second Filipina after discuss throw legend Dela Viña to capture gold medals in both the Asian Games and the Asian Athletic Championships. De Vega was the undisputed queen of sprint of Asia in the 1980s. At just 18 years old, she won the 100m gold and 200m gold in the 1983 Asian Athletic Championships held in Kuwait. She duplicated that feat by winning both events in the 1987 Singapore staging of the same competition.

She also bagged the golds in the 100m races of the 1982 New Delhi Asian Games and the 1986 Seoul Asian Games. In winning all these races, she had to overcome bitter rival and one of the greatest runners in Asian athletic history, PT Usha of India.

De Vega’s national and Southeast Asian record of 11.28 seconds in the 100m was only broken in 2020 by Kristina Knott, who clocked 11.27 seconds in the Drake Blue Oval Showcase in Iowa – 33 years after De Vega set the mark in the 1987 SEA Games in Indonesia.

It also took 32 years for her 200m national record of 23.35 seconds to be reset by Zion Corrales-Nelson in 2019, which was subsequently bettered by Knott that same year.

But focusing on just the accolades that came with her victories does not do justice to the significant role that De Vega played not just in Philippine sports but moreso, in our country’s history. 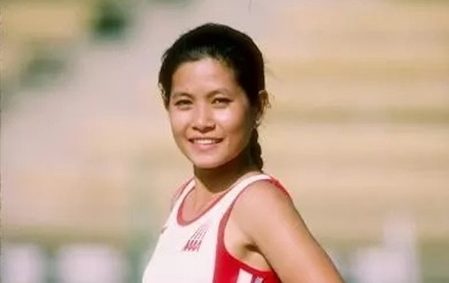 An athlete becomes an icon when her influence extends beyond her sport and touches the fabric of the very people she represents.

De Vega was not just a sports figure. She was bigger than life.

Stories about her on and off the tracks were not merely confined to the sports section but were front page material, opinion page topics, and even lifestyle, showbiz, and society news. She appeared in talk shows, guested on TV sitcoms, and even starred in a movie depicting her journey as an athlete. When she spoke, Filipinos leaned over to listen. The entire country followed her every move.

She burst into the scene at a time in our country’s history when we needed strong female figures who could call attention to the plight and the struggles of Filipina athletes. In a sporting landscape that traditionally was male-dominated, her rise in distinction pushed women athletes to mainstream consciousness.

Her emergence, along with another legendary sports personality in bowling’s Bong Coo, ushered in a decade when Filipina athletes no longer were treated as mere sidelights but were esteemed on the same pedestal as their male counterparts.

Outstanding women in sports such as Arianne Cerdeña-Valdez of bowling, Akiko Thomson-Guevara of swimming, Bea Lucero-Lhuillier of gymnastics (and later, taekwondo), Joan Chan-Tabañag of archery, and Thelma Barina-Rojas of volleyball all made their marks in their respective disciplines and gained wide-scale attention as De Vega helped lay the groundwork for Filipina athletes to get their due recognition.

De Vega embodied the best in the Filipina, and she likewise mirrored the dreams, the aspirations, the fears, and even the heartbreaks of the Filipino people.

Her victories in the international stage were also the triumph of the Filipino spirit. Her battles against the best tracksters in Asia told Filipinos to not wither even in the face of overwhelming odds. Her failure to advance deep in the 1984 Los Angeles Olympics and the 1988 Seoul Olympics served as a reminder that even wonder woman also stumbles and goes down in defeat.

Her longevity at the top taught everyone that persistence, discipline, and grit eventually pay off so long as these are lived out consistently, daily.

Asia’s sprint queen has finished her final lap around the oval. But the elegant strides and the grace by which she represented the country will leave track marks of memories that will be undying. – Rappler.com