MANILA, Philippines – Milos Raonic stunned Rafael Nadal in the closing men's singles set, 6-5 (7-6), for a heart-stopping finish in the Manila leg of the Coca-Cola International Premier Tennis League Tuesday, December 8 at the Mall of Asia Arena.

The Canadian Raonic, currently ranked 14th in the world, displayed grace under pressure to come back from a 3-5 deficit against world's number 5 Nadal in the shootout after the Spaniard clawed out of a 4 games to 2 hole.

Filipino fan favorite Nadal knotted the count at 4-all in the set via a powerpoint opportunity, worth two points, as Raonic netted his return shot.

Raonic later gained advantage in the shootout 6-5 after Nadal's counter went long and eventually won the set on a Nadal return that went wide. The set lasted a thrilling 36 minutes and 43 seconds.

Raonic's steady performance allowed the Philippine Mavericks to break the 19-all tie heading into the final set and slip past the Micromax Indian Aces, 25-24.

It is the first loss of the leading Aces in the entire tournament while the Mavericks managed to sweep all 3 of its matches and finished undefeated in their homecourt.

The Aces still sit atop the standings heading into the New Delhi leg but only lead the second place Mavericks in winning percentage by a slim 54.4% to 53.7% margin. 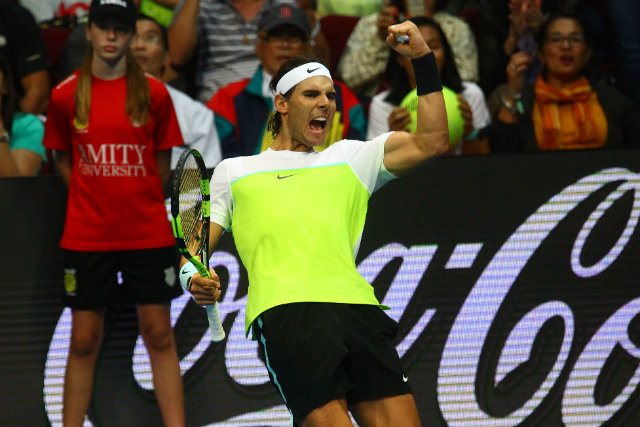 EMOTIONS. Rafa Nadal displays his emotions as he celebrates a point during his tight match against Milos Raonic.

Serena Williams likewise put on a show as she displayed power and endurance while weathering back-to-back challenging sets in mixed doubles and women's singles.

The women's world no. 1 zoomed to a 5-1 lead over Samantha Stosur before the Australian capitalized on several errors from the American star and inched to with 5-3. Williams then went for one final push to win it 6-3.

The Mavericks' Mark Philippoussis converted 6 aces as he went on to defeat Fabrice Santoro, 6-4, in the opening men's legend's singles set. However, the Aces' Ivan Dodig and and Nadal put on an exciting performance worthy of loud cheers from the crowd as they triumphed over Edouard Roger-Vasselin and Richard Gasquet, 6-4, in men's doubles.

Doubles specialists Rohan Bopanna and Sania Mirza displayed their superiority over the duo of Williams and Treat Huey in a 6-3 victory in a mixed doubles set played in just 22 minutes.

The tour continues in New Delhi to Dubai and ends in Singapore on December 18 to 20. – Rappler.com