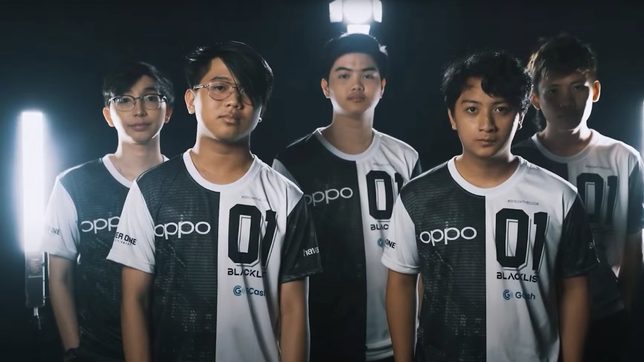 HIGH EXPECTATIONS. Blacklist International continues to live up to the hype as a heavy title favorite in the MPL Invitational.

Blacklist International moved on the cusp of ruling the Mobile Legends Professional League (MPL) Invitational after thwarting RRQ Hoshi to advance to the finals on Sunday, October 7.

The reigning two-time MPL Philippines titleholder became the first team to advance to the championship round as it hacked out a 2-1 win over the Indonesian powerhouse in their best-of-three semifinals.

Kiel “Oheb” Soriano shone anew for Blacklist with a flawless performance in the deciding Game 3, where he delivered 9 kills and 4 assists against 0 deaths despite veering away from the meta by selecting Clint.

Oheb picked up a double kill in the final clash as Blacklist outplayed RRQ even with a disadvantage in numbers.

Trailing in gold earned and having only three players alive, Blacklist still managed to secure the Lord and kill all of the four remaining RRQ players en route to the series-clinching wipeout.

Blacklist methodically nailed Game 1, but RRQ scored the equalizer with a swift 13-minute win in Game 2.

The only Filipino team standing, Blacklist will tangle with another Indonesian squad in the finals as it awaits the winner of the other semifinals pairing between Alter Ego and Onic Esports.

The best-of-five finals is slated at 6:25 pm on Sunday. – Rappler.com