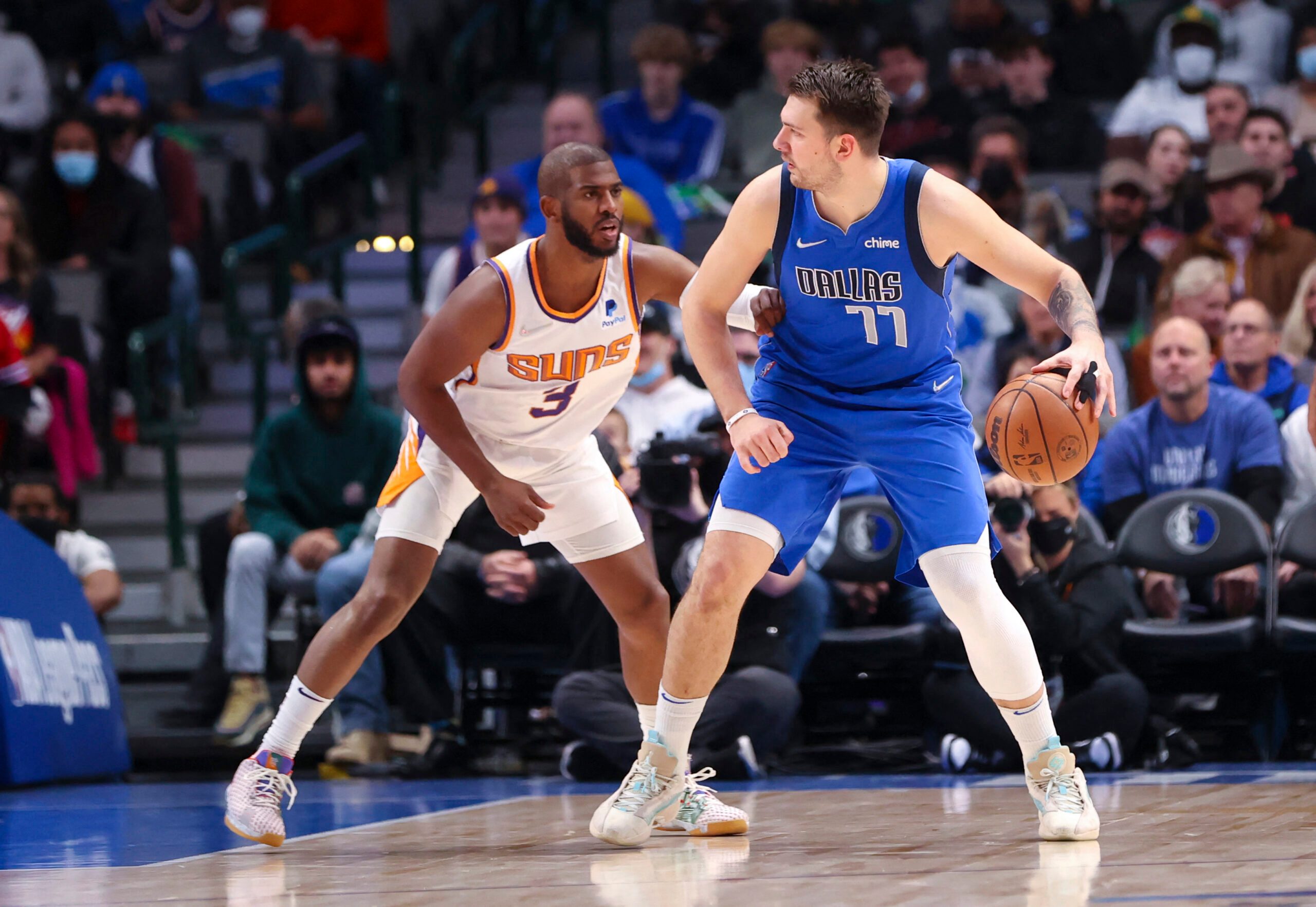 TOP GUNS. There's no question Chris Paul (left) and Luka Doncic should be named in the 2022 All-Star crew.

MANILA, Philippines – With the NBA set to announce its list of All-Star reserves this week, let’s take a look at the players from each conference who should make the trip to Cleveland for the league’s annual midseason activities.

(Note: Since Durant, who is a captain, is expected to miss the game, we selected eight players as reserves from the East, including our pick to replace him.)

Butler was almost disqualified from All-Star credentials due to the games he missed because of tailbone and ankle issues, but it would be criminal to not have a Miami Heat player in this list given they’re currently competing for the top seed in the Eastern Conference. Butler has also been healthier as of late, which should further justify him for the honor.

He is still Miami’s best player and arguably its most versatile weapon. We’ve seen different versions of Butler this season depending who the injury-hit Heat have lined up on a nightly basis. He can be their go-to scorer, main distributor, or defensive fulcrum.

For as deep as head coach Erik Spoelstra’s squad is, at their best, Jimmy is still the key that ignites their engine, regardless of his role per evening.

While DeMar DeRozan has been Chicago’s best player, there’s no denying there are nights when LaVine not only matches his co-running mate’s production but even exceeds it. One of the best scorers in the NBA, Zach has been nearly as integral in propelling the Bulls back to the top of the East.

He’s also an improved defender while remaining the dangerous weapon he is on offense as a 3-level creator. When it comes to shot-making, few players can match LaVine’s creativity and talent with putting the ball in the hole.

The rise of Cleveland’s premier guard should come as no surprise given no other than Steph Curry himself provided him with a stamp of approval.

The Cavaliers’ resurrection this season has been one of the NBA’s best stories and Darius Garland’s play has been critical in making that happen.

Despite losing his backcourt partner in Collin Sexton, Garland has taken his game to the next level and is now the key focus on the Cavs’ offensive attack. One of the best young scorers in the league, this should be the first of many All-Star appearances.

The Brooklyn Nets star might not be as good (and lean) as he was during his MVP days in Houston, but there’s no denying that he’s still atop the list of the best basketball players there are in the world today.

Few ballers can control the pace and rhythm of the game like Harden, who moves at his own pace and can affect the outcome of a contest in a variety of ways: passing, scoring, or even just directing offense.

Given that Brooklyn is within striking distance of a top seed despite injuries to Kevin Durant and Joe Harris and vaccine-related challenges for Kyrie Irving, it’s only right to reward James with his 10th All-Star appearance.

It’s said that the All-Star Game takes place for the fans’ amusement, so it would be only fitting to include Charlotte’s premier hooper.

One of the most exciting young talents in the NBA today, Ball is putting up superb numbers regularly while leading the Hornets to a winning season in only his second year. With his dazzling array of trick shots and Houdini-like passing, Ball’s ticket to Ohio should already be stamped.

The Raptors have stayed in the playoff picture despite the departure of Kyle Lowry and it is thanks in large part to the spectacular play of Fred VanVleet, who’s one of the best two-way guards in the East.

VanVleet has taken over chief playmaking responsibilities for Toronto while developing into one of the best snipers in the NBA. His ability to spread the floor and create plays for others have provided an avenue for Toronto’s other standouts – like Pascal Siakam, OG Anunoby, and Scottie Barnes – to shine and compete with the best of their conference.

Boston may be underperforming this season, but there’s no denying Jayson Tatum continues to establish himself as one of the best flat-out scorers in basketball. An argument can be made his inefficiency has occasionally hurt his team and contributed to their underwhelming record, although it’s more evident the Celtics would be worse than they are if not for the former Duke Blue Devil.

When talking about the best players in the NBA, Tatum has to be on the list.

Another major reason for the Cavs’ resurgence has been the fantastic play on defense. The rim-defending Jarrett Allen has been instrumental in holding down the fort.

It’s no secret the presence of superb rookie Evan Mobley has contributed to Cleveland’s stingy rim protection, although Allen’s rebounding and efficient scoring near the rim have been just as important as the Cavs embark on their journey to the postseason for the first time since the days of LeBron James.

He is the NBA’s ultimate puppet master – the all-around savant who can do almost everything on the basketball court. He can grind the game to his pace. He can score. He hits jumpers. He’s efficient from midrange and downtown. He fishes for free throws. He plays smart defense. He knows how to work the referees. His mind is a computer.

The Suns are currently the best team in basketball

Devin Booker’s not as complete a player as Paul is, but he’s a killer on the court nonetheless. One can even argue that what he does best – scoring – is a department where he eclipses Paul. He may very well be the X-factor in determining a Phoenix Suns NBA title.

When it comes to Booker, the statistics, wins, flair, and capability are all evident. The conversation around him is now about whether or not his team holds an NBA trophy when the season ends. There’s no argument he shouldn’t be an All-Star.

In Cleveland, he should go for the MVP.

And then who knows, he might be in the bigger MVP conversation after.

The Jazz started this season looking like the dominant squad they were from last year, when they led the Western Conference standings. A recent losing slide, unsurprisingly, took place the same period when Utah didn’t have Rudy Gobert, who should be considered the ultimate paint-protecting game changer in the NBA.

While flawed, Gobert also remains a weapon on offense – a rim-running giant of a basketball player who creates spacing just by being a highly effective force near the rim. He doesn’t have a jump shot, but his free throw shooting isn’t terrible. He’s also a solid screener, allowing guards like Mike Conley and Donovan Mitchell to attack the paint.

Utah’s top guard, who many think of as “Dwyane Wade 2.0,” is having the most efficient season of his NBA career with a career-high in FG (45%). His team is one of the best in the West and some of their latest losses have also coincided with his absence, portraying how important he is to their success.

Mitchell is elite at getting to the rim and is crafty with creating space to get decent-looking shot attempts, when offense is required. He can occasionally be lackadaisical on defense but some of that might be due to the load he takes on the other end of the court.

He is one of the NBA’s premier young talent and figures to be a long-term All-Star.

Say what you want about the Luka-weight jokes, he remains at least a top 10 player in the NBA today.

Doncic might never be the most athletic or speedy superstar, but very few have the ability to use the defender’s moves to his own advantage.

Luka is such a basketball virtuoso that he already anticipates what his opponent will do following his initial action. Because Doncic thinks two steps ahead, he already has a counter to what type of defense is going to be thrown at him and uses that advanced information to his advantage.

Often times what stops him is luck more than an adversary. You can’t say that about many basketball players.

KAT hasn’t enjoyed a lot of winning in his NBA career. He’s always put up the numbers to validate himself as one of the league’s promising players with untapped potential. The question has always been, will his contributions on the basketball court ever translate to consistent winning?

For the first time in a while, that’s been the case, although that could change as Minnesota hovers at .500. Nonetheless, they have a legitimate claim to playoff contention, even if it’s at the bottom, and after the last two decades, that should feel like a win for the franchise.

Before Draymond Green got injured, there was more talk of the Warriors being the NBA’s favorite to win the NBA title and Steph Curry’s claim to the MVP.

Both have taken a hit since he’s been out of the lineup, despite the return of Klay Thompson, as well.

As much of a machine LeBron or CP3 are on offense, the same can be said about Green’s defense. His playmaking is stellar, too. He’s proven himself time and time again as the glue that holds Golden State together on both ends of the floor.

For all he contributes, he is All-Star worthy. – Rappler.com