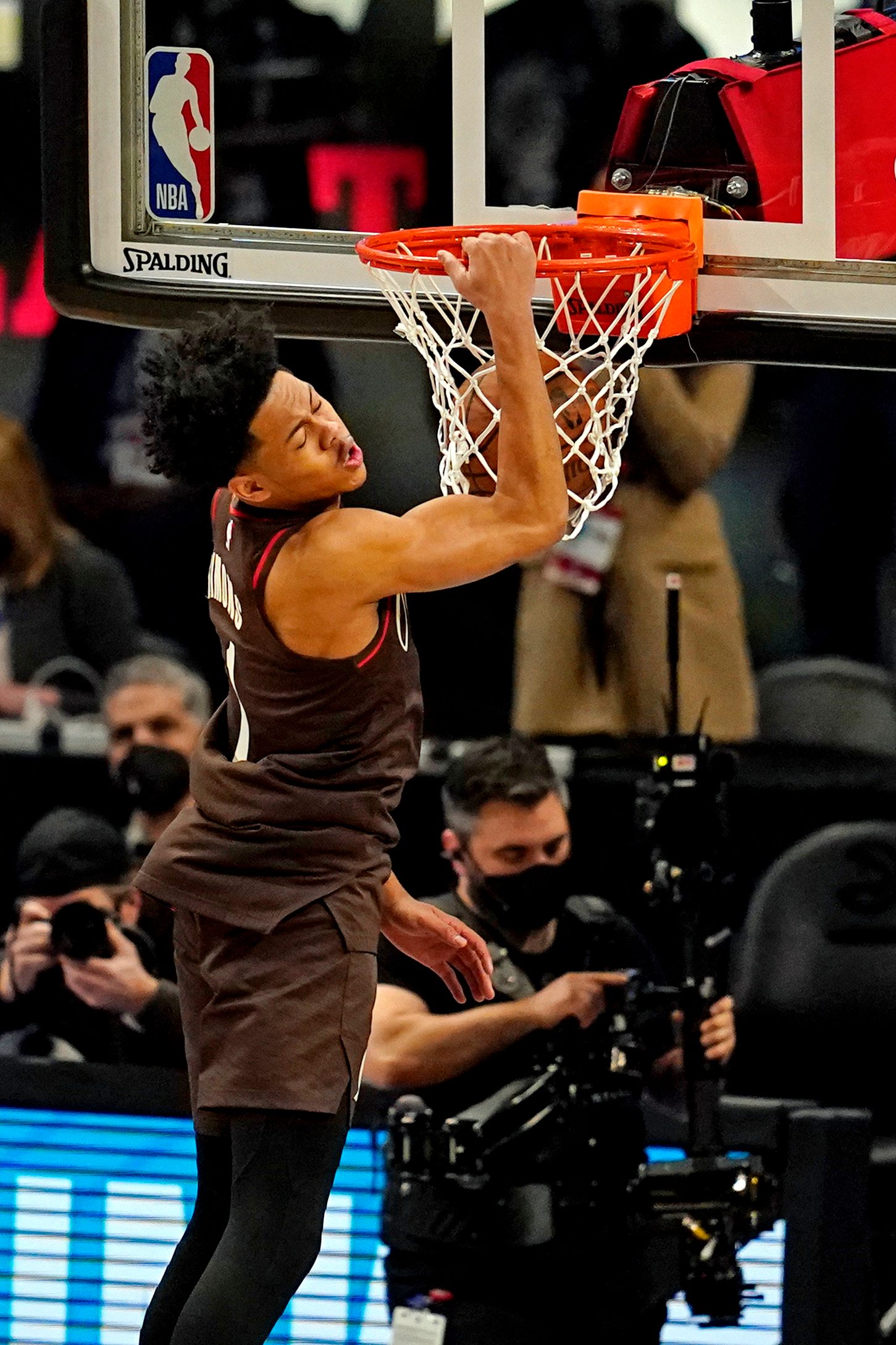 SEALED WITH A KISS. Anfernee Simons’ puckered lips nearly comes in contact with the rim in his winning slam.

Anfernee Simons kissed goodbye the competition in the NBA Slam Dunk contest, nearly locking lips with the rim on a grand finale that was deemed good enough to edge Obi Toppin for the 2021 crown as the league’s top dunker during the annual All-Star festivities Sunday night, March 7 (Monday, March 8, Philippine time) in Atlanta.

The 21-year-old from the Portland Trail Blazers shared the All-Star Game undercard spotlight with Stephen Curry, who needed to make his last shot to edge Mike Conley in the 3-Point Contest, and Domantas Sabonis, who won a battle of big men over Nikola Vucevic for the Skills Challenge crown. (READ: Curry bags 3-point title, Sabonis shows skills)

After winning Round 1 of the three-man competition with 95 points, one more than New York Knicks rookie Toppin, the two were allowed just one more dunk to determine the 2021 champion. (LIVE UPDATES: NBA All-Star Game 2021)

Toppin, who had dunked over his father, Obadiah, and teammate Julius Randle to eliminate Cassius Stanley in the first round, completed his finals dunk first, setting the stage for Simons to do better.

He did, jumping high enough so that his puckered lips nearly came in contact with the rim as he slammed the ball through the hoop.

In a new scoring system, Simons was deemed to have performed the best dunk in the finals by 3 judges, while the other two opted for Toppin.

Simons had the highest scoring dunk among two attempts apiece in the first round, scoring a 49 on his second try after being awarded a 46 on his first.

Toppin scored 48 and 46 for a 94 total, one fewer than Simons but easily enough to beat out the Indiana Pacers’ Stanley (44, 37) for the second spot in the finals.

As a concession to the COVID-19 pandemic, the 3-point and skills competition were held immediately before the NBA All-Star Game on Sunday instead of one day prior. The slam dunk contest was scheduled for halftime of the All-Star Game.