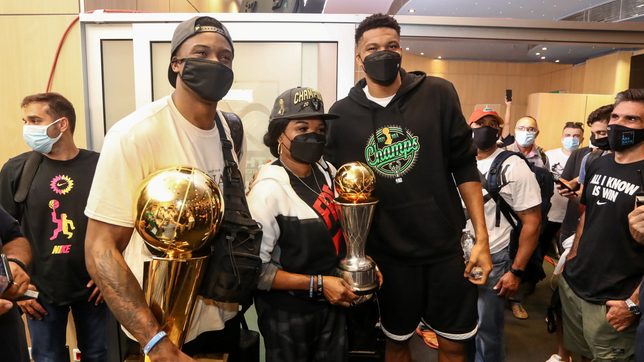 HOMETOWN HEROES. Bucks star Giannis Antetokounmpo (right) poses with his brother and teammate Thanasis and their mother Veronica as they arrive at the Eleftherios Venizelos International Airport in Athens.

Giannis and Thanasis Antetokounmpo, the Greek brothers who helped the Milawaukee Bucks to their first NBA championship in 50 years last month, promised to take their trophy back to Sepolia, the run-down Athens neighborhood where they grew up.

Born in Greece to Nigerian immigrant parents, the Antetokounmpo brothers had to sell trinkets on the street to get by. They grew up fearing deportation and did not obtain Greek citizenship until 2013.

“I am very, very happy that one of the biggest trophies in the world is in Greece right now,” Giannis told a news conference during a visit to Athens with his brother alongside him.

“It’s an incredible thing. We don’t know how many days we’ll stay, but we definitely want to take it back to Sepolia and the places we grew up.” Giannis, dubbed “the Greek Freak,” was the dominant player in the finals series against the Phoenix Suns, scoring 50 points in the last game and winning the Most Valuable Player award.

Thanasis was forced to sit out the last two games of the finals under COVID-19 protocols.

The brothers’ extraordinary rise from Sepolia to the NBA has seized the imagination of the whole of Greece, where basketball normally trails football in popularity.

In their old neighborhood, rarely celebrated in the headlines, a giant mural of Giannis in his Milwaukee Bucks jersey, across the court where he and his brothers played and practiced, is testament to the pride felt in his success.

“This journey has been crazy. If you told me eight years ago that I’d be in this position, along with Thanasis, and we’d have the NBA trophy with us, and that we can take it anywhere we wanted, I’d say you’re crazy,” he said.

“But it’s all been done with hard work – and we haven’t stopped. We don’t stop, as a family. That’s what we saw all our lives, our parents never stopped, we’d get back home after school, after practice and we saw our parents constantly working, every day to feed us.” – Rappler.com