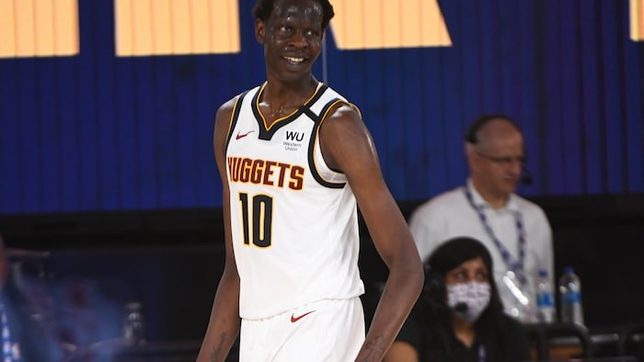 Facebook Twitter Copy URL
Copied
Playing his first scrimmage with the Nuggets, 7-foot-2 rookie Bol Bol impresses with a double-double against the Wizards

Once again, the Denver Nuggets may have struck gold in the NBA Draft.

In his first-ever scrimmage with the main roster, 7-foot-2 rookie Bol Bol dropped a 16-point, 10-rebound double-double with 6 blocks as the Nuggets defeated the Washington Wizards, 89-82, at Disney World Orlando on Thursday, July 23, Manila time.

Meanwhile, 7-foot big man Nikola Jokic got the surprising starting nod at point guard and finished with an all-around line of 16 points, 7 boards and 7 assists as the NBA played its first games since the season suspension back in March.

Jokic was recently the talk of the town after he slimmed down to an extreme extent during the league’s downtime, raising concerns that he has lost too much weight and strength.

It was an experiment that somewhat paid off for the Nuggets as the gigantic Bol started at small forward while 6-foot-9 Jerami Grant was slotted in at shooting guard against the severely depleted Wizards.

Since his college days at the University of Oregon, Bol has been touted as the next NBA unicorn and regularly played up to 3 positions despite his height.

Unfortunately, the son of shot-blocking extraordinaire Manute Bol suffered a stress fracture on his left foot and scared away practically the entire league on draft night.

After being scouted as a consensus five-star prospect and penciled in at the top 10 of the 2019 draft, Bol slid all the way down to the 44th pick with the Miami Heat before being traded to the Nuggets.

He would become the second straight top-ranked prospect to land in Denver since 6-foot-10 forward Michael Porter Jr dropped to the 14th pick in 2018 due to similar injury concerns.