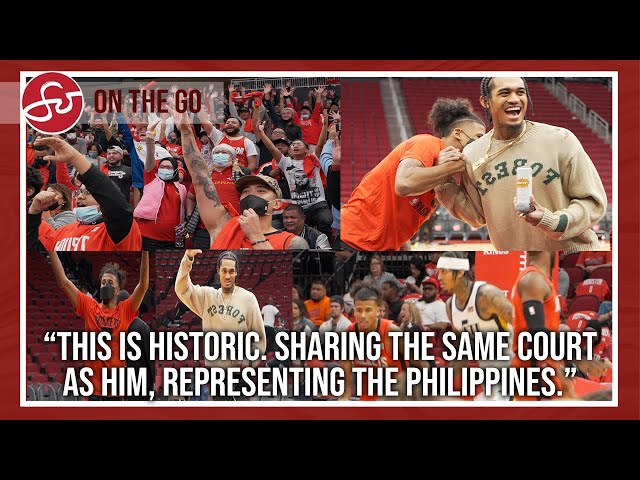 The love affair that Filipinos have had with basketball stretches back decades. For Filipino-American History Month, the National Basketball Association (NBA) showed Filipinos that the feeling is mutual.

History was in the air on October 28, when the Utah Jazz traveled to Houston for a regular season game against the Rockets. For the first time in history, two players with Filipino heritage shared the same court in an NBA game. Jordan Clarkson, the league’s reigning Sixth Man of the Year, led the Jazz, while Jalen Green, a 19-year-old rookie from Fresno, California, bannered the home team.

Both players have embraced their Filipino heritage, giving Pinoy fans a new reason to celebrate.

“This is historic, I don’t know if it sank in on me yet. We’re going to be the first and nobody else could ever do it again,” Clarkson said during the post-game interview.

“This is awesome, sharing the same court as him, representing the Philippines,” said Green of Clarkson.

Filipino-American media pioneer Jannelle So Perkins – credited for starting the first and only locally-produced daily talk show for and about Filipinos in America – traveled to Houston to observe history, but also to speak with the organizers who helped make the celebration of Filipino heritage a reality for her new show, So Jannelle.

Green and Clarkson have showed that they are more than willing to wave the flag for the Philippines on the court.

Green has been to the Philippines twice, including in 2018, when he dropped a tournament-record 51 points on the National University Bullpups in the Exped SM NBTC National Finals at the Mall of Asia Arena.

Clarkson represented the Philippines at the 2018 Asian Games in Jakarta, leading the country to a fifth-place finish. Clarkson says he hopes to see Green wearing the three stars and a sun on the international stage soon.

“The next thing we got to work on is getting Jalen one of those jerseys,” said Clarkson. The Filipino representation wasn’t limited to the court. Leilani Borbon Costa, the Rockets’ director of event and promotions, is a Filipina. Costa and her team arranged the Filipino Heritage Night event, which she says she hopes to make into an annual event for the Houston-based team.

“Just seeing the commonality that we all and what sports can do, especially after a year of COVID-19 and being separated,” said Costa, of what she liked about the event. “It’s nice so that we can come back for a common love and a common goal.”

Those sentiments were shared by Elma Loeser of the Filipino Young Professionals of Houston.

“I think it’s really great that we’re all coming together and just uniting as one, showcasing our culture and that we’re proud to be here, proud to be Filipino and it’s just so awesome to see so many Filipinos out together in the community,” said Loeser.

But the true winner that night was the Filipino community, and their reciprocated love for the sport of basketball. – Jannelle So Productions | Rappler.com