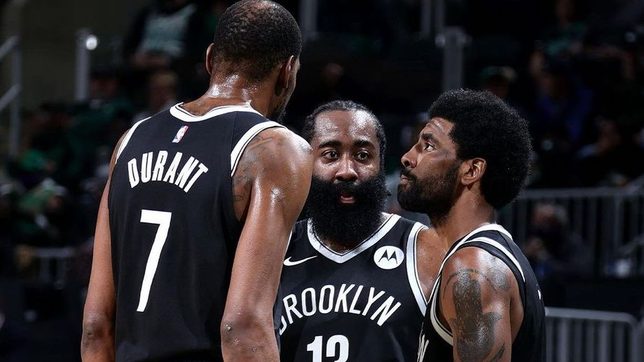 BIG THREE. The Brooklyn Nets can't quite keep their 'Big Three' of (from left) Kevin Durant, James Harden, and Kyrie Irving all healthy at the same time.

ESPN reported that coach Steve Nash said Irving will get treatment in Brooklyn and not travel with the team.

Nash also said, however, that James Harden emerged well from his 46-minute effort Tuesday night when the Nets won 114-108 to take a 3-2 lead in the series and will again be available for Thursday.

Harden had been held out for three games with a hamstring injury that he suffered in the first minute of Game 1 of the series.

Nash had said before Game 5 that he didn’t know whether Irving would be available for the remainder of the playoffs. On Wednesday he noted that the seven-time NBA All-Star has yet to return to any on-court work.

Despite their injury woes, the Nets surged to victory behind Kevin Durant’s remarkable 49-point masterpiece, and Harden’s gutsy performance in the pivotal Game 5.

Durant never left the court during a magical effort that included 17 rebounds and 10 assists. He made 16-of-23 shots, including 4-of-9 from three-point range, and sank 13 of his 16 free throws.

Bucks star Giannis Antetokounmpo called Durant “the best player in the world right now” after the performance, one in which the Milwaukee defensive ace rarely found himself defending the Brooklyn standout. 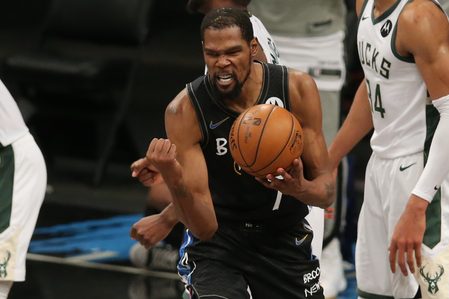 Antetokounmpo, who fumbled away an opportunity to tie the game before Durant made two clinching free throws with 15 seconds left, insisted afterward he’d like to see a different defensive strategy employed in Game 6.

“I want to take the challenge,” he said of matching up with Durant. “Obviously, everybody’s gonna have a chance to guard him, but I would love to go into Game 6, to be able to guard him. If coach (Mike Budenholzer) wants me to do that, I’m ready for it.”

The fact that Brooklyn was still able to put up 114 points and shoot 49.4% against one of the NBA’s best defenses was testimony to how great Durant was.

Harden was on the floor for 45 minutes and 39 seconds of action – the third-most in his playoff career – and contributed 8 assists and 6 rebounds to the win.

“I was a little nervous for him because he hasn’t played in a while and that’s a physical team and his hamstring is one of those injuries that takes a while to heal,” Durant said, “but he came out there and toughed it out.”

Harden shot just 1-for-10, including 0-for-8 on three-pointers, and finished with 5 points.

“He missed some good looks,” Durant said. “I know his legs are going to get back under him as time (passes) the next few days or so. Hopefully, next game he’ll start to knock down some of those shots he usually makes.

“We’ve got our work cut out for us in Game 6, man. It’s going to be our toughest game of the year.” – Rappler.com