Nets’ star trio back for another try vs Cavs 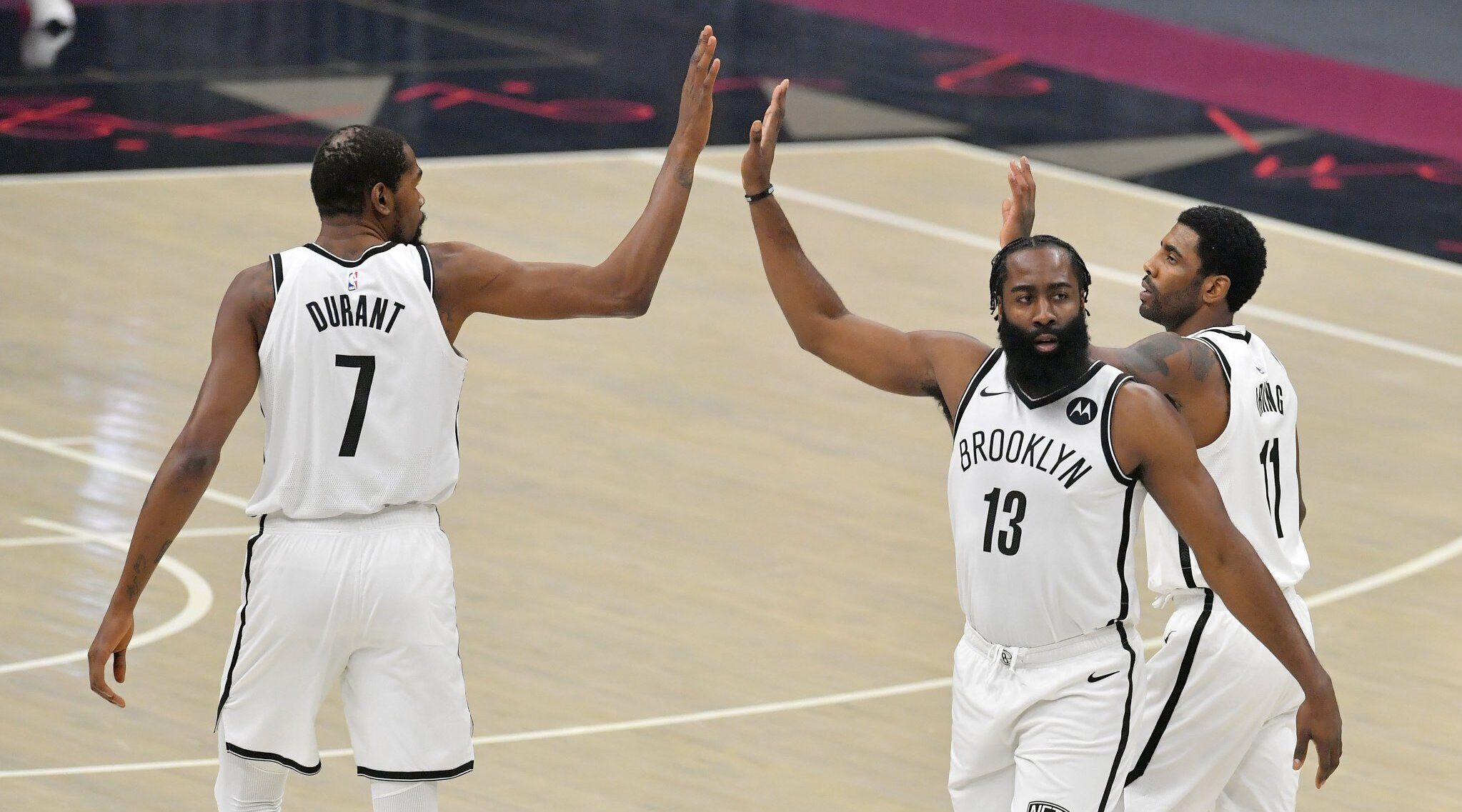 BIG THREE. The powerhouse trio of (from left) Kevin Durant, James Harden, and Kyrie Irving go for their first win together.

The Brooklyn Nets unveiled their star trio of Kevin Durant, Kyrie Irving and James Harden this week, and they produced plenty of offense against the Cleveland Cavaliers.

But the Nets did not anticipate their defense allowing the Cavs’ Collin Sexton to go on a major scoring binge in overtime.

The trio will be on the floor again Friday night, January 22 (Saturday, January 23, Philippine time) but this time the Nets hope their defense can contain Sexton when the teams reconvene in Cleveland.

Cleveland posted a wild 147-135 double overtime win Wednesday by overcoming the combined 96 points by Brooklyn’s trio, who combined for 28 points in the 4th quarter when the Nets forced overtime on a tip-in by Irving.

“We had breakdowns all over the place,” Nets coach Steve Nash said after his team allowed over 120 points for the fifth time.

Brooklyn’s trio was playing together for the first time since Irving missed Harden’s first two games due to personal reasons and health and safety protocols.

What did not feel right from Brooklyn’s perspective was trying to stop Sexton, who scored a career-high 42 points after missing the previous 5 games with a sprained left ankle.

Sexton dominated the overtimes, hitting the game-tying three-pointer over Irving with 1.2 seconds left in the first overtime, and scoring 15 more points in the second overtime.

“I definitely accepted the challenge,” Sexton said. “I knew it was not going to be easy because it’s Kyrie.”

Sexton’s domination beyond regulation continued his strong start to this third season since being drafted by Cleveland with the eighth pick in 2018 – a pick the Cavs obtained from Boston as part of the 2017 Irving trade. He averaged 16.7 points as a rookie and improved to 20.8 points last season.

This year, Sexton is averaging 27 points on 53.4% shooting on a team managing just 102.9 points per game (29th in the league after Wednesday’s games).

At one point Wednesday, Sexton scored 20 straight points in overtime and according to the Elias Sports Bureau, his 15 points in the second overtime were the most by a Cavalier in the last 20 years.

“I don’t know many teams that could put up 20 points in the 5 minutes, but Collin got hot,” Irving said. “I give the young fellow credit.”

“He was just on fire tonight,” Cleveland forward Cedi Osman said. “He was unconscious. He was out of his mind. He was making all shots. It was beautiful to watch.”

Besides Sexton’s strong start, Osman is also off to a quick start. He scored 25 points in Wednesday’s win and is averaging a career-best 13.9 points.

The Cavaliers will be seeking their third straight win after Sexton’s dynamic performance. They won their first 3 games and then dropped seven of the next 9 before getting a 106-103 win over the New York Knicks last Friday. – Rappler.com