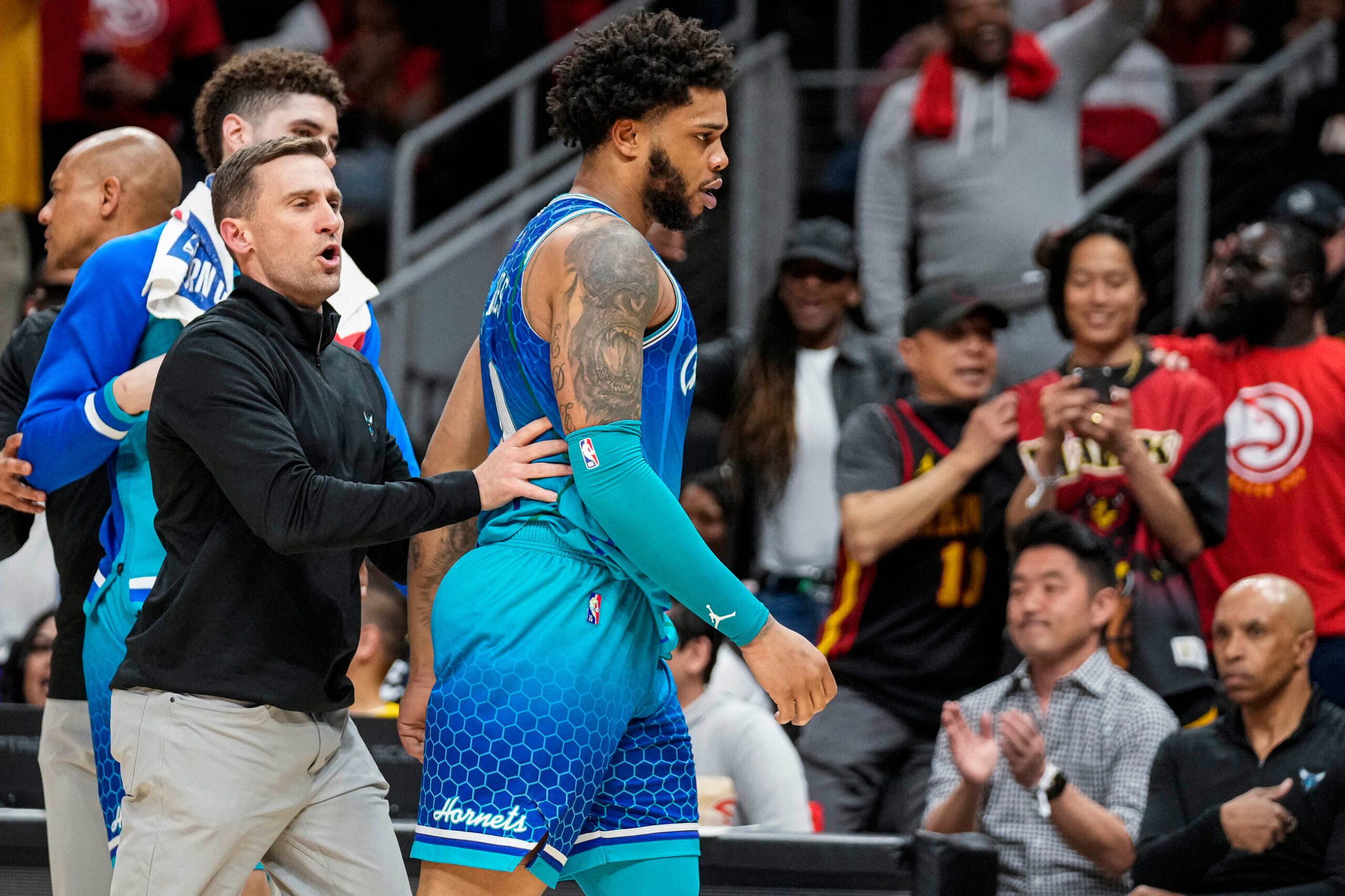 FURIOUS. Hornets forward Miles Bridges is restrained after being called for a technical foul and being ejected from the game against the Hawks.

Facebook Twitter Copy URL
Copied
‘That's out of character for me,’ says Hornets' Miles Bridges, who apologized to a young fan as the NBA bills him a $50,000 fine

The NBA announced a $50,000 fine for Miles Bridges of the Charlotte Hornets on Thursday, April 14, one day after he threw his mouthpiece into the stands.

Bridges apologized after the incident in which his mouthpiece struck a young fan. He threw it after receiving two technical fouls in the fourth quarter.

The Hornets went on to lose 132-103 against the host Atlanta Hawks in an Eastern Conference play-in game.

A fan taunted Bridges on his way to the locker room, and he responded by throwing the mouthpiece in the fan’s direction. But it hit a girl two seats over instead.

“I was aiming for the guy that was screaming at me and it hit a little girl,” Bridges said. “So that’s definitely unacceptable on my part and I take full responsibility…

“That’s out of character for me. You’ve been around me; I don’t act like that or ever flash out like that. So that was definitely wrong, a lot of emotions and hopefully I can get in contact with the young girl and sincerely apologize to her and do something nice for her, but that’s definitely on me.”

Bridges added  he wouldn’t fight any punishment handed down by the NBA.

“I was upset about a call, a couple of calls really,” Bridges said. “I let my temper get the best of me. It was definitely the wrong thing to do.”

What the cuss: Pat Beverley billed another $30K

Minnesota Timberwolves guard Patrick Beverley owes $30,000 for expletives aired in a postgame press conference and profanity on social media after the team beat the Los Angeles Clippers in the play-in round of the NBA playoffs on Tuesday.

Beverley, who was traded from the Clippers in the offseason, keyed Minnesota’s 109-104 victory over Los Angeles to send the Timberwolves into the first round of the postseason.

He also was fined $25,000 by the NBA for “improper conduct toward a game official” on April 12. After receiving a second technical foul with 19.5 seconds left in the second quarter of Sunday’s regular-season finale against the Chicago Bulls, Beverley was ejected and told referee David Guthrie, “You’re trash. Trash.”

As he left the floor for the locker room, Beverley patted the official on the backside. – Rappler.com